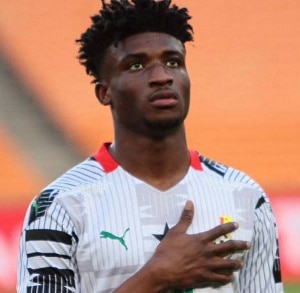 Ghana midfielder Mohammed Kudus has explained how he recovered from a failed transfer to Everton to become one of the in-form players in the world currently.

Kudus has scored a career-best six goals in his last five matches, including a stunner against Liverpool in the Champions League last week, but things could have been different had he got his wish last month.

The Ajax star had an impressive pre-season for the Eredivisie giants, scoring three goals in as many games, but coach Alfred Schreuder only gave him a combined 28 minutes in the first four games of the season, leading to agitation for a move away due to frustration.

“Everton offered me a great opportunity and I wanted to try it,” Kudus told NOS.

“No footballer wants to sit on the bench and neither do I. Although I understood that not everyone can play all the time, Everton seemed like a good option at the time.”

Kudus did not get his wish and the failed transfer took its toll on him. He failed to turn up for training in the days just after the transfer window shut with reports suggesting that he had been on a go-slow after seeing teammate Antony employ the same strategy to force a move to Manchester United.

“It wasn’t that I didn’t want to train, but I’m human and had a lot to deal with in a very short time. The chapter is now over and I’m still here,” he explained.

He has turned the adversity into triumph, scoring in the last five straight matches, including in the Champions League against Rangers and Liverpool, to become Ajax’s main man.

The goal against Liverpool, when he picked up a Steven Berghuis pass just on the edge of the box and fired an unstoppable rocket in off the underside of the crossbar to beat Alisson with his left foot, saw him hailed as the next jewel from the Ajax school.

He, however, remains humble, choosing the ‘Wakanda Forever’ celebration, a salute from the Marvel superhero movie Black Panther, whenever he scores.

“There is negative opinion that comes into our work. To me, that gesture [Wakanda Forever] represents blocking negative things from coming your way,” explained Kudus.

“I’m picturing that I’m crossing two swords, forming a wall that holds back obstacles and problems.”

“Such a moment goes much deeper than just celebrating a goal. For me, it is also about my personal life: that I am strong and stay true to myself.”

After fearing he could miss out on a ticket to the World Cup by staying on the bench at Ajax, Kudus has turned into one of the ‘undroppable’ for Ghana and he cannot wait for the trip to Qatar.

“My mission is far from complete. There is much more I can show you. The marathon continues: it never ends.”

NPP outspent us in the 2020 General Elections – Afriyie Ankrah