MoFA has no business in food distribution chain – GAWU 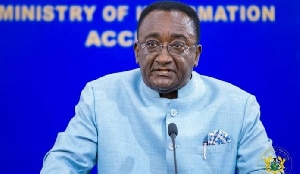 The Planting for Food and Jobs (PFJ) pilot market efforts of the Ministry of Food and Agriculture (MoFA) in the food distribution chain have drawn some criticism from the General Agriculture Workers’ Union (GAWU).

The government has no business acting as a food middleman, claims GAWU.

The Ministry of Food and Agriculture (MoFA) tested the sale of a few chosen food goods on Friday, November 11, 2022, at its forecourt in Accra to help some Civil and Local Government staff obtain access to affordable food items in the aftermath of food price increases in the nation.

Edward Kareweh, the General Secretary of the GAWU, questioned the ministry’s decision to launch the program.

He was of the view that the ministry was usurping the work of the National Buffer Stock Limited while speaking in an interview on the 505 news analysis programme hosted by Valentina Ofori Afriyie on Accra-based Class 91.3 FM on Friday, November 11, 2022.

He was categorical in saying the ministry has no mandate to engage in such exercises when there is a dedicated company for doing so.

He further questioned the ministry’s budget for playing the role of food middleman in the food distribution and supply chain.

”The ministry ought to tell us which budget they are using for the pilot programme when there is the need for the ministry to scale up its supply of fertilizers to farmers among others in the country,” he stressed.

He said since 2021 the ministry has scaled down the supply of fertilisers to farmers across the country.

This should be a source of worry to the minister and the heads of departments at the ministry and not dabbling in the food supply chain.

He said there has been a drastic reduction in subsidies on fertilisers leading to a reduction in the volumes supplied to the farmers.

He added that what is needed to salvage the situation is investments in agriculture and not the ministry drifting to areas it has no mandate.

He said there is a shortage of maize which is a key component in PFJ crops and asked why the ministry is not working to make that available through the PFJ pilot market but rather focusing o plantain which is not part of the PFJ list of crops?

Tags: Ministry of Food and AgricultureThe Planting for Food and JobsValentina Ofori Afriyie