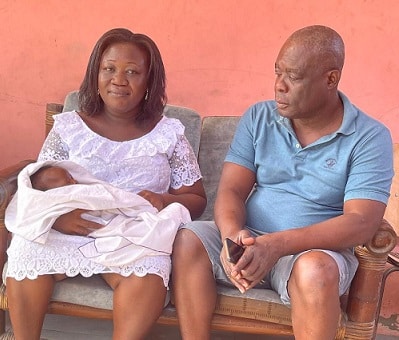 The 37 Military Hospital in Ac­cra has said that the ultra-sound scans conducted on a woman be­fore delivery were error-ridden.

According to the hospital, the error was detected after fur­ther inquisition into the missing twin saga.

The hospital has, therefore, apologised to the couple and said the issue would serve as a wake-up call to the hospital, promising to release the result of an investigative report to the family this Friday.

These were the outcome of a meeting held on Monday with senior military officers, including the Chief of Staff (COS) at the General Headquarters (GHQ) of the Ghana Armed Forces (GAF) – Major General Nicho­las Peter Andoh, and the family of Daniel Naawu – husband of the woman who was expecting twins, for a briefing at the Bur­ma Camp in Accra.

Other top military officers present at the little-over-an-hour meeting which was at the behest of Maj Gen Andoh, were Brig. Gen. Raymond Kwabena Ewusi, the Director of General, Ghana Armed Forces Medical Services, Naval Commander Dr Paul Yeg­be, an Urologist and surgeon at the 37 Military Hospital and Ma­jor Alfred Topper – a member of the team set up to investigate the issue.

Dr Ali Saine, a senior obstetrician and gynaecologist at the 37 Military Hospital, who performed the Caesarean Section (CS) on that fateful day (September 8, 2022), was also present to respond to questions at the meeting.

The four-member family of Naawu, led by the legendary Ghana goalkeeper, John Naawu, took turns to bombard Dr Saine with questions on the supposed missing twin and the ultrasound scan taken at the hospital after 31 weeks.

According to Dr Saine, the hospital expected twins as the scan had shown but was sur­prised to see only one baby.

He blamed the situation on a flawed diagnosis first conducted at the Cerica Diagnostic Services in Accra that suggested the woman, Ms Audrey Agyapong, was carrying double foetuses.

Responding to a question, Dr Saine conceded that the sec­ond scan done at the 37 Military Hospital, was also error-ridden, insisting that only one baby was delivered.

On his part, Maj Gen Andoh said the hospital had no inten­tions of doing anything malicious knowing their credibility and rep­utation was always on the line.

“We will not shield anybody who tries to bring the military’s name into disrepute.

“But we’re a human institu­tion; such errors are bound to occur, and would be guided by this going into the future,” he was quoted as saying.

When contacted yesterday, Technical Director and Radiol­ogist of the Cerica Diagnostic Centre, Dr Eric Otu-Danquah, was alarmed at the contention of the 37 Military Hospital, saying his outfit did due diligence in arriving at its result.

“We are not saying we are infallible but in the best of our knowledge, we were diligent in our delivery.

“It’s unfortunate they came to that conclusion. I have my contact numbers on the scan report in the possession of Ms Agyapong; so they could have called to cross­check if they had any doubts,” Dr Otu-Danquah told the Ghanaian Times.

The 37 Military Hospital, it was disclosed to the Ghanaian Times, would hand over the final report of the investigations into the case that commenced in Oc­tober 2022, to the Naawu family this Friday.

In a painstaking investigative story carried by the Ghanaian Times on Wednesday, January 18, 2023, the couple narrated how they went to the 37 Military Hospital expecting twins only to be handed one baby after delivery and thus suspected foul play.

The first scan report, which was signed by Dr Otu Danquah, was conducted on April 22, 2022, at the Cerica Diagnostic Services when the pregnancy was 20 weeks old.

Its results showed live intrauterine (inside the uterus) foetuses.

A second ultrasonic scan done at the 37 Military Hospital on July 21, 2022 and signed by Drs M.T Mpetey and R. Asiedu, a Resident and Senior Physician respectively, confirmed results of the earlier scan with twin A weighing 269g and B weighing 261g.

“In all, we did four different scans, all showing I was carrying live twins and it is baffling that one could disappear at birth,” Ms Agyapong told the Ghanaian Times.

Explaining further, she said on September 7, 2022, when her gestation period was 38 weeks, she was admitted at the 37 Mil­itary Hospital where her vitals were taken with two foetal heart beats confirmed as normal.

In a follow-up story by Gha­naian Times on Friday, January 20, 2023, the couple was informed that the placenta tissue of Ms Agyapong, had been sent to Italy for further examinations.

The exercise, according to the Military Hospital, was to deter­mine whether the 38-year-old woman was delivered of twins, which has generated a vortex of interest among Ghanaians.

Over 11,000 dead in Turkey, Syria after Monday’s earthquake