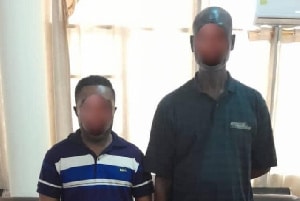 Two key personalities in the Mankessim area where a ritual murder is said to have taken place earlier this month have gone missing for weeks now.

The two are the fetish priest of the area and one Mr. Kwesi Gyan, the Abiradze Ebusuapayin, a relation of one of the suspects, Nana Clarke.

Nana Akwa III, the Chief of Akwakrom, at a press conference this week has called for the arrest and inquiry into the activities of the two persons “who could not be tracked since the news broke out,” a GNA report of September 29 read.

“We are appealing to the police to interrogate his fetish priest in the community who the Tufohen liked so much and took cover prior to his arrest,” Nana Akwa pleaded.

Nana Akwa, during the press conference wondered how the Tufohen dug the craters containing numerous bottles and dead materials without the knowledge of the Ebusuapanyin.

“Since the arrest of the Tufohen, all attempts to reach his Ebusuapanyin, who was always in the community, has not been successful. There is no way anyone can dig out two pits in two separate rooms in a family house without the knowledge of the Ebusuapanyin. This is incomprehensible.

“More so, prior to the arrest of the Tufohen, his Ebusuapanyin was billed to meet the Chief and elders on some teething community issues, but he cannot be found. And why is he not answering our calls,” the Chief revealed.

Hundreds of people on Thursday gathered in front of the house of Christopher Ekow Quansah, the Tufuhen of Mankessim, to catch a glimpse of him and self-styled pastor Michael Darko, who allegedly murdered one Ms. Georgina Asor Botchwey.

A police team had led the two accused persons, who allegedly confessed to the killing of three more people, to the house of the Tufohen, located just after the Pacific Fuel Station, near the Mankessim Lorry Station for further investigations.

The crowd hooted at them amid name calling and casting of aspersions as drivers in traffic temporarily stopped over to watch the two, who have notoriously become famous.

A source told the GNA that the two accused persons had confessed to killing three other people, a male and two females and led the police team on Thursday afternoon, to the various locations.

The witness said the accused persons first took the team to the house of the Tufohen at Mankessim and Akwakrom near Mankessim, where they carried out their criminal activities.

The police thoroughly searched the rooms and took vital document and information for further investigation.

Again, in Mankessim, the two took the police team to a location where a male teacher was allegedly invited by them and was shot and killed instantly and his toes cut.

The team also visited a location at Batanya in the Abura-Asebu-Kwamakese District, where they allegedly killed a young lady from Kumasi.

Apparently, the two pretended to be travel agents and prepared a traveling document for her to travel to Holland.

The two allegedly told the police that they met the lady at Batanyaa on the Cape Coast-Assin Fosu Highway and killed her.

Party scatters as Groom fights with man who sprayed money