Liz Truss likely to be Britain’s next prime minister

The person most likely to replace Boris Johnson as leader of Britain’s governing Conservative Party and Prime Minister of the UK is a political chameleon who has gone from radical abolitionist to flag-bearer of the Euroskeptic, Conservative right.

Liz Truss, who was only elected to Parliament in 2010, has — in a relatively short period of time — established herself as a political force of nature who pursues her agenda with relentless vigor and unequivocal enthusiasm.

However, with most opinion polls suggesting she’s poised to get the keys toÂ Number 10 Downing Street, her critics are asking: What exactly does she stand for?

Many who have observed her over the years question whether she has any sincere beliefs at all, or if she simplyÂ endorses whatever is the most convenient at the time.

To say that Truss has been on a political journey would be an understatement. She was born in 1975 into a family that she herself has described as “to the left of Labour,” the main socialist opposition. She grew up in parts of the UK that didn’t traditionally vote Conservative, moving between Scotland and the north of England.

In contrast to her privately educated Cabinet colleagues, Truss went to a state school in Leeds, and later won a place at Oxford University. There she was an active member of the Liberal Democrats, a centrist opposition party that has long been an effective opponent to the Conservatives in large parts of England. 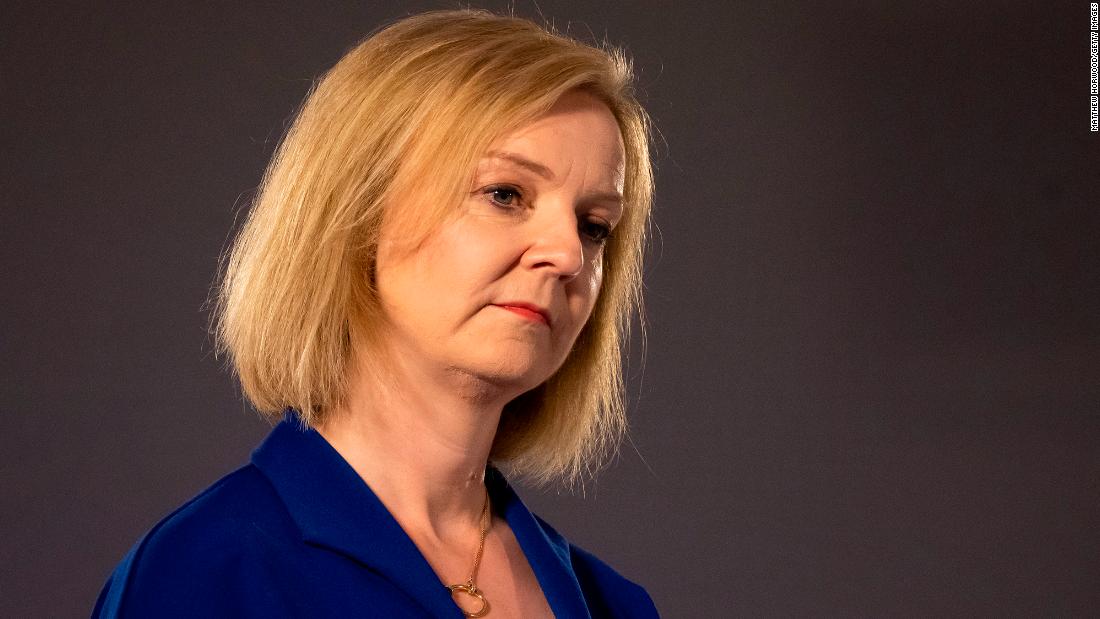 During her time as a Liberal Democrat, Truss supported the legalization of cannabis and the abolition of the royal family — positions that are at total odds with what most would consider to be mainstream Conservatism in 2022.

Truss says she joined the Conservatives in 1996, just two years after she gave a speech at a Liberal Democrat conference calling for the end of the monarchy.

Even then, fellow Liberal Democrats questioned her sincerity and spotted traits that they still see in her today.

“I honestly think she was playing to the gallery back then, whether she was talking about decriminalizing drugs or abolishing the monarchy,” Neil Fawcett, a Liberal Democrat councilor who campaigned with Truss in the ’90s,Â told CNN. Â “I think she is someone who plays to the gallery with whatever audience she is talking to, and I genuinely don’t know if she ever believes anything she says, then or now.”

Truss has certainly continued to capture the attention of her audience. Since joining the Conservatives and becoming a member of Parliament, she has fervently supported almost every conceivable ideology.Â She served loyally under three prime ministers in several different cabinet jobs, and is currently foreign secretary.

Most notably, she supported remaining in the European Union in 2016. At the time, Truss tweeted that she was backing those who wanted to remain in the bloc because “it is in Britain’s economic interest and means we can focus on vital economic and social reform at home.”

Truss now backs Brexit, saying that her fears before the referendum that it could cause “disruption” were mistaken. TheÂ aspiring Tory leader is even threatening to scrap all remaining EU legislation in the UK and override the Brexit deal that Johnson negotiated with Brussels in a way that the EU believes is illegal. She has also blamed France and the EU for border checks at Dover, the main port between the UK and France. 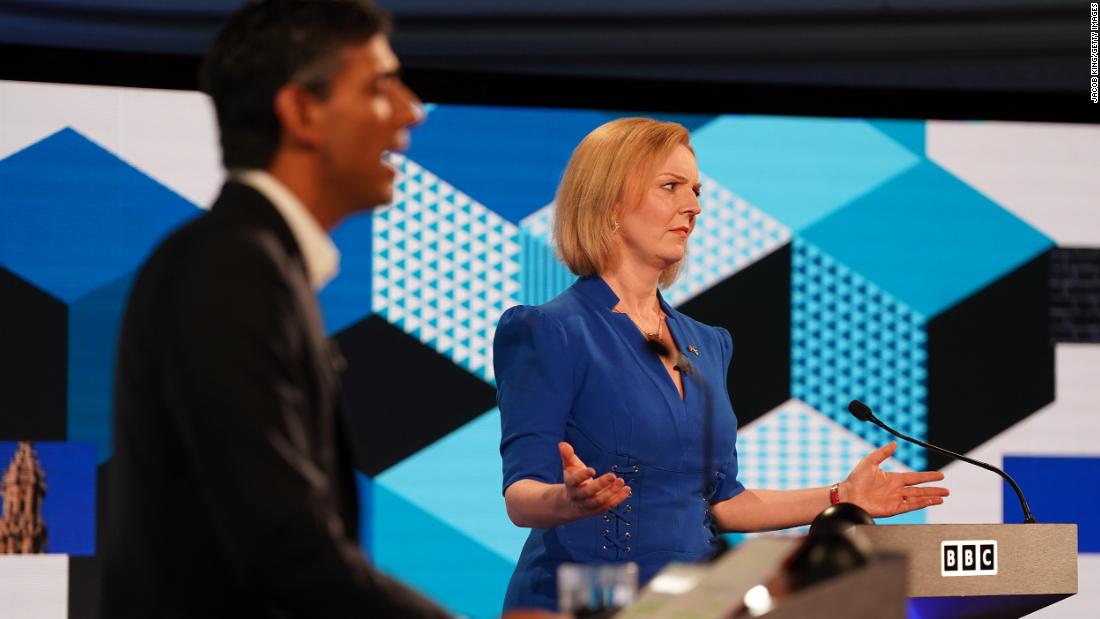 There is a debate within the Conservative Party as to how real this support of Euroskepticism really is. Some think Truss was reluctantly following government orders at the time of the referendum in 2016,Â which opposed Brexit. Others find that argument inconceivable.

Anna Soubry, a former Conservative cabinet minister, told CNN that Truss “had the most cover out of any of us to support Brexit. Her brief at the time included the farming community, who supported Brexit on the whole. I sat around the cabinet table and heard everyone’s reason for doing what they did and findÂ it hard to believe she’s changed her mind quite this much.”

On the other hand, Gavin Barwell, who served as former Prime Minister Theresa May’s chief-of-staff, said that, after the Brexit vote, “Truss made a decision very quickly that there wasn’t room for a compromise. If you were to do it, it needed to be done fully. And as the stalemate dragged on, she argued that a binary choice was coming between leaving with no deal and Brexit being reversed, and the latter would be catastrophic for the government.”

The closer she edges to power, the more Britons wonder what a Truss premiership would look like.Â She has campaigned to lead on the most conservative of agendas. She has pledged to slash taxes from day one, tear up EU regulationsÂ and encourage private sector growth with low corporation tax. She has said that she will not impose a windfall tax on energy companies despite them posting huge profits during the cost-of-living and energy crisis.

These sortsÂ of policies are, of course, red meat to the Conservative members who will ultimately vote for her. And while some of those who know her question how much she actually believes in them, there is little doubt she will put her full effort into implementing them and making her impact immediately felt. 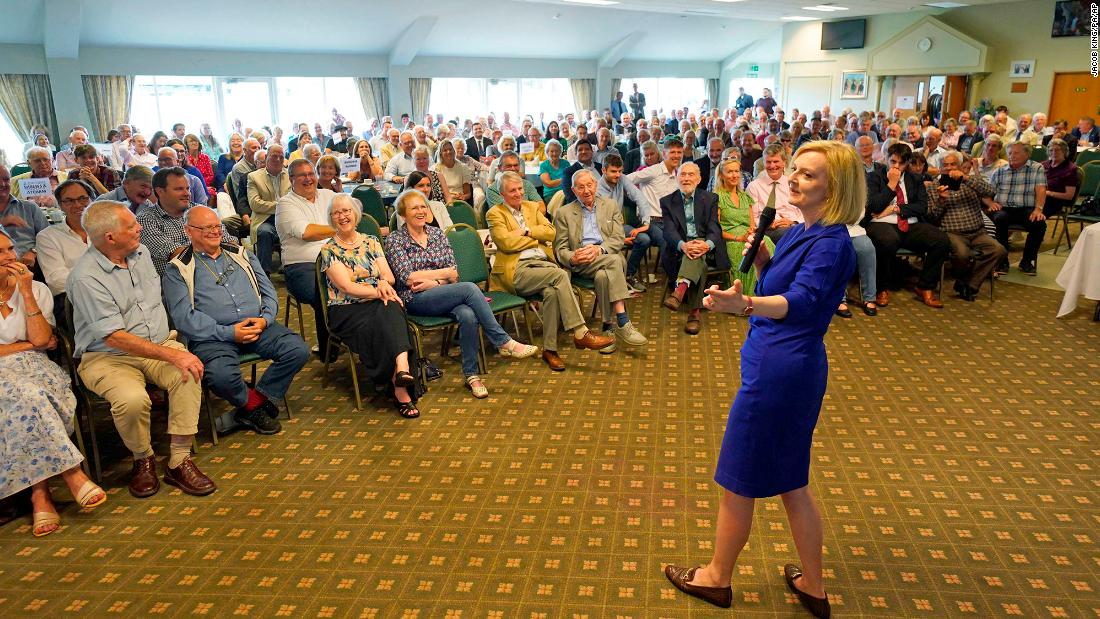 It’s likely that a Truss premiership would ultimately look a lot like Johnson’s, but with a greater emphasis on cutting taxes, shrinking the state and, potentially, an even harder line on Europe. Critics have said that the tax cuts she’s promised would lead to even greater inflation and rises in interest rates amid a forecast recession. Questions have also been raised over a pledge Truss made to cut public sector pay, allegedly saving the public $8.8 billion. Her economics have been questioned by her critics, and the uproar over perceived callousness towards public sector workers forced Truss to U-turn.

Julian Glover, a journalist and speech writer to former Prime Minister David Cameron, was a university contemporary of Truss and remembers traits in her that are still recognizable today: Determined but unfocused.

“We only passed each other briefly and she was in a different year to me, but despite that, she stands out in my memory as a sort of strange, unfocused force, hugely in favor of action and change,” said Glover. “It was always hard to see the aim of it all, or where it might lead, except that she would be at the center of it.”

Roger Crouch, who succeeded Truss as president of Oxford University Liberal Democrats, told CNN that he remembers a woman who was “determined, single-minded and willing to challenge orthodox and prevailing, often male, wisdom.”

Unlike many of those who knew Truss in her younger years, Crouch, who is now a teacher, thinks that her opinions haven’t changed a huge amount since the ’90s. “Liz was always more of a privatizing, libertarian liberal so there is a consistent thread of thought there. I remember a student discussion group in which she advocated privatization of lamp posts.”

If she wins, Truss will have a hard time uniting her party, which has been in power for 12 years and has been bitterly divided over Brexit for six of them.

She will also have to lead the country through its worst cost-of-living crisis in decades. Inflation is at a 40-year high, energy bills are set to increase by hundreds, possibly thousands of pounds a year, and the UK is forecast to enter a recession before the end of the year. This winter, many families will have to make a tough choice between eating or heating. And for a party that has been in power for over a decade, it’s hard to deflect the blame for that onto anyone else.

Her supporters see the chance for a fresh start in Truss. They believe that with Brexit out of the way and the scandals that led to Johnson’s downfall soon to be a distant memory, the party will turn its focus to remaining in power and winning a historic fourth consecutive general election.

For her detractors, it is more complicated. During this leadership contest those who have supported her rivals feel that they have been unfairly maligned simply for disputing that Truss should be handed the keys to Downing Street.

When it comes to running the country, this might be a problem for Truss. She had the support of fewer MPs than her rival Rishi Sunak during the early stages of the contest and the bad blood between the two camps has worsened over time.

And for all of Truss’s determination and single-mindedness, if she takes over a party torn by infighting and suffering in the polls during a cost-of-living crisis that happened under the Conservatives’ watch, she might find her key objective too hard a task to achieve: Making her party electable at the next general election after almost a decade and a half in power.