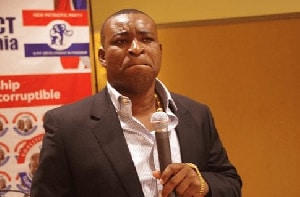 Chairman Wontumi is the owner of Akonta Mining Company

The Ministry for Lands and Natural Resources, Samuel Abu Jinapor, has directed the Forestry Commission to cease the operations of Akonta Mining Company in the Tano Nimiri Forest Reserve of the Amenfi West Municipal Assembly.

According to a statement issued by the Public Affairs of the Ministry on Friday, September 30, 2022, the Company owned by the ruling New Patriotic Party Chairman for Ashanti Region, Antwi Boasiako alias Wontumi has been engaging in mining activities in the forest without a permit.

“The attention of the Ministry of Lands and Natural Resources has been drawn to publications about certain operations by Akonta Mining Limited in the Tano Nimiri Forest Reserve in the Amenfi West Municipality in the Western Region.

“Our records show that Akonta Mining Ltd, on 25 August, 2022, applied for a Mining Lease to undertake mining operations in the said Forest Reserve. By a Ministerial Directive, all reconnaissance, prospecting and/or exploratory activities in Forest Reserves in the country are suspended, except in exceptional circumstances. Although this directive does not affect mining in Forest Reserves, Akonta Mining Limited’s application has not been determined. Accordingly, any alleged activity being undertaken by the company in the Forest Reserve is illegal.

“The Hon. Minister for Lands and Natural Resources has, therefore, directed the Forestry Commission to, forthwith, ensure that the company does not carry out any operation in the Forest and to take the necessary action against any person found culpable in this matter,” the statement added.

The Ministry further assured of its commitment to the fight against illegal mining.

This development comes on the back of a renewed public conversation about the impact of illegal mining on Ghana’s water and forest reserves.

Currently, several water bodies are under threat from the galamsey activities while forest covers are being depleted by the day.

The group added that the galamsey menace has become rampant owing to the government’s inability and unwillingness to fight it despite the devastating impact it is having on the country.

The group has therefore warned of its plans to shame the government if the president fails to end galamsey.

“For our part, we will send a reminder to you every Monday until we see firm action to stamp this crime out. If that fails, we will shame your government by going to court to compel the government to sit up and do its job! That is not a threat, sir; it is a promise,” the statement dated September 28, 2022, said.

Meanwhile, there have been reports of two shooting incidents concerning illegal mining activities.

According to reports, the first incident occurred at Samraboi where workers of Chairman Wontumi’s Akonta Mining are said to have shot at security officers of Samertex, a timber mining company.

The second incident is a clash between members of the Okyeman Environmental Taskforce and a community mining group at Asaman Tamfoe in the Atiwa East District.

A viral video from one of the incidents shows the indiscriminate firing of gunshots by a group of gun touting men.