Kyebi in floods after hours of torrential rains 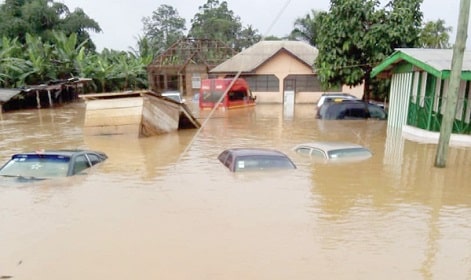 The Birim River overflowed its banks and caused flooding in the neighborhood last Wednesday as a result of hours of severe rain.

Along with flooding several homes, the river’s overflow also rendered other streets unusable.

Many of the vehicles that were on the roads prior to the commencement of the rain as well as those attempting to cross the river were partially buried.

People utilizing other structures, like as containers, kiosks, and some buildings, were compelled to leave and stay with friends and family because they were similarly and partially inundated.

This is the first time in over 50 years that Kyebi has witnessed flooding of this magnitude and it is being attributed to the impact of illegal mining that has impacted the Birim River in Akyem Abuakwa area.

An eyewitness, Francis Kodua, told the Daily Graphic that the rains partially submerged about 37 buildings forcing the dwellers to move out to stay temporarily with friends and relatives at more safe and higher areas.

He said although some houses were submerged, areas seriously affected by the torrential rains were the Kyebi Court, Kyebi Presbyterian College of Education and the Abuakwa State

No casualty was recorded, but according to the eye witness, a number of animals such as goats, sheep and fowls were drowned.

He indicated that those affected were living in fear of the rains recurring and therefore, appealed to the National Disaster Management Organisation (NADMO) for assistance.

The eyewitness said the Abuakwa South Municipal NADMO Coordinator, Police Commander and the Fire Service Commander were all at the scene to assess the situation.