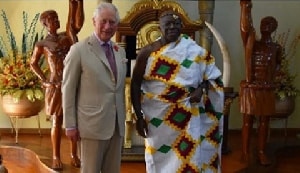 King Charles met with Otumfuo during his 2018 visit to Ghana

King Charles III spoke, via telephone, with a number of world leaders in connection to the funeral of his late mother and former monarch, Queen Elizabeth II.

Among others, he spoke to political leaders and some royal leaders with close ties with the British monarchy.

According to a list shared by Cameron Walker, a Royal Reporter with GB News, King Charles spoke to the ‘King of Ashanti,’ as well as Presidents of Ghana, the United Arab Emirates and Egypt and Prime Minister of Bangladesh.

President Akufo-Addo and First Lady Rebecca Akufo-Addo have been spotted in London along with other world leaders attending the funeral of Queen Elizabeth II.

A formal invitation to the Asantehene was also formally invited via the Foreign and Commonwealth Office, FCO. A later report indicates that the Asantehene also communicated his inability to attend the funeral.

The world’s longest serving leader, Her Majesty Queen Elizabeth II, was pronounced dead on Thursday, September 8, 2022, via a statement from the royal family.

She became queen at the age of 25 and remained on the throne for seven decades before her death.

Elizabeth II was Queen of the United Kingdom and Head of State for 14 other jurisdictions.

Queen Elizabeth’s eldest son Charles, 73, has been named succesor and by that becomes king of the United Kingdom and the head of state of 14 other realms including Australia, Canada and New Zealand. His wife Camilla becomes Queen Consort.