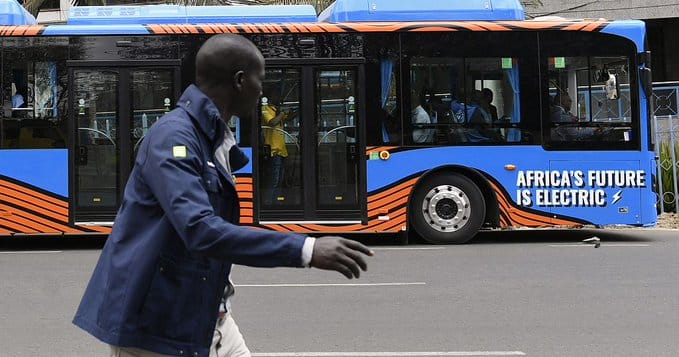 Kenyan high school physics instructor has come up with a creative way to use old laptop batteries even though they only cost him KSH 50 ($0.50) a piece.

The teacher collects the batteries from dealers in Nairobi, takes the haul back to his workshop where he uses them to power bikes.

He sorts them, dividing the working cells from those which are not working.

Waweru then assembles them into a battery that can be used to power electric motorbikes. He was inspired to come up with this innovation after running into trouble with a bike he’d bought.

“Nobody was selling electric bikes in Kenya, so I had to import one,” he explains.

He collects frames from old motorbikes, removes the engines and replaces them with a battery and a motor to propel the bike.

They run on a 60V direct current. The batteries take hours to charge but can take 45 minutes if on a fast charger.

A fully charged battery can travel a distance of up to 100 kilometres. He says his invention compares very well to traditional motorbikes.

“Ecomobilus bikes are more advantageous compared to other gasoline powered bikes. Number one, because of the cost of maintenance. Ecomobilus bikes require zero maintenance because there are no mechanical parts that need to be repaired every often, we give it at least two years for services because the engines are no longer there, we are dealing with motors,” he says.

“Number two, the charging as compared to the fuelling is much, much (more) affordable. For a full charge, we are saying we are using less than $3 and for the same for the bodabodas (referring to motorbike taxis), they end up spending more than $7 a day to run the same bike. So, cost-wise, this would be more cost effective, and number two, in terms of maintenance, this will be very, very easy to maintain.

They are being used around the city by couriers and delivery drivers.

Some say they are saving money since ditching petrol (gas) fuelled bikes for these electric versions.

“The other one was expensive in terms of fuel, in terms of time but with the electric one, it consumes less time it is efficient, I save on fuel I do not use fuel anymore. I only consume 200 ($2) on tokens and am good for the rest of the day,” says driver John Mwangi.

He has been using the bike for around six months.

They also get a seal of approval from Dennis Wakaba, an electric mobility specialist.

“Having new batteries gives you longer life in an electric vehicle, but the use of secondary battery is very significant, especially in the play of climate change mitigation. In this way, first of all, you save the processes that are involved in the manufacture, assembly shipping of new batteries. So, definitely, you are saving a lot of emissions coming from these processes,” he says.

“The other one is to do with increasing the number of electric vehicles through making sure that secondary batteries can go into conversions of motorcycles and other electric vehicles. Here we are going now to reduce air pollution, through tailpipe emissions from internal combustion engines, which now don’t have to be bought. The other way is noise pollution, which definitely when we have less noise pollution, we improve the well-being of the people.”

Not only do they help the environment, the batteries are easy to source in Kenya, so they are long term option for residents who need to get around.