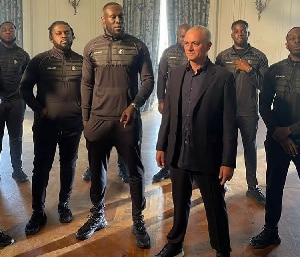 Stormzy with coach Jose Mourinho and others

The ‘Special One’ was part of a host of superstars’ who featured in the video for the song ’Mel Made Me Do It.’

Fans were shocked to see the former Chelsea, Manchester United and Tottenham boss in the ten-minutes video released on Thursday evening.

Stormzy in his song captured Mourinho’s popular phrase “I prefer really not to speak. If I speak, I’m in big trouble” in his masterpiece.

Mourinho made the iconic quote after a defeat during his time at Chelsea in 2014.

In a post on social media, the coach posted a picture of himself and Stormzy with the caption, “Was great fun doing this cameo for Stormzy’s new music video out today. I had a great time.”

Stormzy is known to be a huge fan on Premier League side, Manchester United.