I’ve never seen protests of this scale in Shanghai – resident 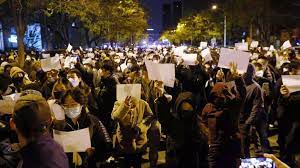 More from Shanghai now, where thousands protested against strict Covid measures over the weekend – with some even calling on President Xi Jinping to step down.

One observer of the protest there is Frank Tsai, who organises public lectures in China. He told the BBC he was surprised at how large the protest had become.

“I haven’t seen any protests of this scale in Shanghai in the entire 15 years that I have lived here,” he said.

Over the past two or three decades, he said, there have been tens of thousands of small-scale protests about things including labour rights and land grabs.

But, he says, “very, very few” have targeted the central government, and “basically nothing” has targeted the regime itself before.