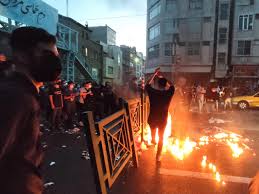 At least 76 protesters have been killed by Iranian security forces during 11 days of unrest sparked by the death of a woman in custody, activists say.

State media have put the number of dead at 41, including several security personnel, and blamed “rioters”. Hundreds of people have also been arrested, 20 of them journalists. “The risk of torture and ill-treatment of protesters is serious and the use of live ammunition against protesters is an international crime,” said.

IHR’s director Mahmood Amiry-Moghaddam. “The world must defend the Iranian people’s demands for their fundamental rights.” The UN human rights office also said it was very concerned by the authorities’ violent response and urged them to respect the right to protest peacefully.

How Mahsa Amini became a symbol of defiance in Iran The anti-government demonstrations have spread to more than 80 cities and towns across Iran since the funeral of Mahsa Amini on 17 September.

The 22-year-old Kurdish woman from the north-western city of Saqez had been visiting the capital, Tehran, on 13 September when she was arrested by morality police officers for allegedly violating the strict law requiring women to cover their hair with a hijab, or headscarf.

She collapsed after being taken to a detention centre to be “educated” and died in hospital following three days in a coma. The police said Ms Amini died after suffering sudden heart failure, but her family have dismissed that and
alleged that she was beaten by officers.

Iranian morality officer: Why we tell women what to wear the protests against the morality police and hijab law triggered by her death quickly evolved into the most serious challenge that Iran’s Shia Muslim clerical establishment has faced in years.

Videos posted on social media have shown women defiantly burning their headscarves on bonfires and cutting their hair in public to cheers and chants of “Women, life, freedom” and “Death to the dictator” – a reference to the Supreme Leader, Ayatollah Ali Khamenei.

On Monday, protests were reported in Tehran and a number of other cities, including Yazd, in the centre of the country, and

Tabriz and Sanandaj, in the north- west. Students and teachers at more than 20 universities also staged a strike and walked out of their classrooms.

1px transparent line Iran Human Rights said it had recorded the deaths of 76 protesters across 14 provinces as of Monday, including six women and four children, although it warned that restrictions on the internet were causing delays in reporting.

Thirty-five of the deaths were reported in Mazandaran and Gilan provinces, north of Tehran, and 24 in the Kurdish-populated, north-western provinces of West Azerbaijan, Kermanshah, Kurdistan and Ilam, it added.

IHR said that videos and death certificates it had obtained confirmed that live ammunition was being fired directly by security forces at protesters – something Iranian authorities have denied.

Iranian officials have also announced the arrests of more than 1,200 people. The US-based Committee to Protect Journalists demanded the release of at least 20 reporters and bloggers who had been detained, as well as human rights defenders, lawyers and civil society activists.

“Iranian security forces must drop their repressive measures against the journalists telling this critical story and restore the internet access that is vital to keep the public informed,” the CPJ said.

The BBC’s Kasra Naji says there are reports that the unrest has stretched the security forces to the limit, with the head of the judiciary seen in one video saying that riot police had been deployed “24 hours a day” and that “they did not sleep last night and the nights before”.

There are also claims of serious doubts among security personnel about engaging with the protesters, our correspondent adds.

The commander of the riot police in the capital was filmed telling his men not to hesitate and to fight the protesters, just as Iranians fought invading Iraqi forces in the 1980s.

President Ebrahim Raisi has meanwhile spoken of the need
to “take decisive action against opponents of the security and peace of the country”.