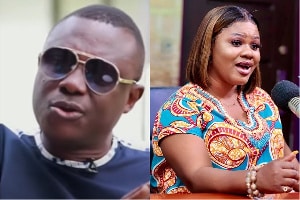 Pastor Love Kweku Hammond, the former husband of gospel singer, Christian Love now known as Obaapa Christy, has disclosed that he wrote all her major songs when they were together, however, they couldn’t make a profit back in the day.

The preacher, who doubles as a songwriter, has disclosed that his exceptional songwriting skills earned his former partner major hits in the music industry.

“I have a number of songs to my credit. I wrote Maame Joyce’s song ‘Nhyira’. It was Pastor Love who wrote ‘Eye Adom’.

“I think I wrote 8 albums for my ex-wife. I wrote the song ‘Me Werenfi’. I can say that after her song ‘Metease’, I wrote all others that came from her,” Pastor love disclosed in the interview monitored by GhanaWeb.

Speaking in an interview with Afia Tamakloe on Mahyease TV show, Pastor Love noted that music was not lucrative when his partner recorded several hit albums which were all written by him.

“I can say that at that time, music wasn’t fetching money. We were not making money at that time. We gave the song to someone to produce it, the reason we didn’t make money. They say there is something called royalties but nothing came out of it. There was no money,” he said.

The talented singer and her husband went their separate ways some 11 years ago but have been in the news for various reasons with Pastor Love accusing his wife of keeping their children away from him.

Watch the video below: