‘I was young and ignorant’ – KiDi apologizes again over old tweets

Afrobeats and Highlife singer, KiDi, has once again had to apologize to the general public especially personalities whom he insulted and passed negative comments about in tweets that date back to 2012.

In the last 24 hours, the singer has dominated entertainment shows in Ghana, made headlines and also topped Twitter trends after his damning old tweets once again resurfaced.

Wednesday, September 28, was supposed to be one of KiDi’s biggest days on the calendar with the release of his latest EP titled 4Play.

It was however marred with the tweets that saw him attack personalities including Delay, Sarkodie, Yvonne Nelson, Nana Akufo-Addo among several others.

It would be recalled that KiDi in 2020 had to tow the same lane when these old tweets came to haunt him. This is not the first time social media users have dug up the famous singer’s tweets.

In the latest apology sighted by GhanaWeb on Thursday, September 29, the ‘Touch It’ hitmaker expressed remorse while pleading for forgiveness from his victims

“Years ago, when I was young and ignorant and didn’t understand the implications and consequences of my words, / tweeted things that were inappropriate and unkind. As I matured, I came to be extremely regretful of these actions and how they affected the parties involved. I want to apologise again to everyone for the statements I made, and use this to remind us all to be mindful of the things we say and how they affect people. Let’s be Kind to each other.” 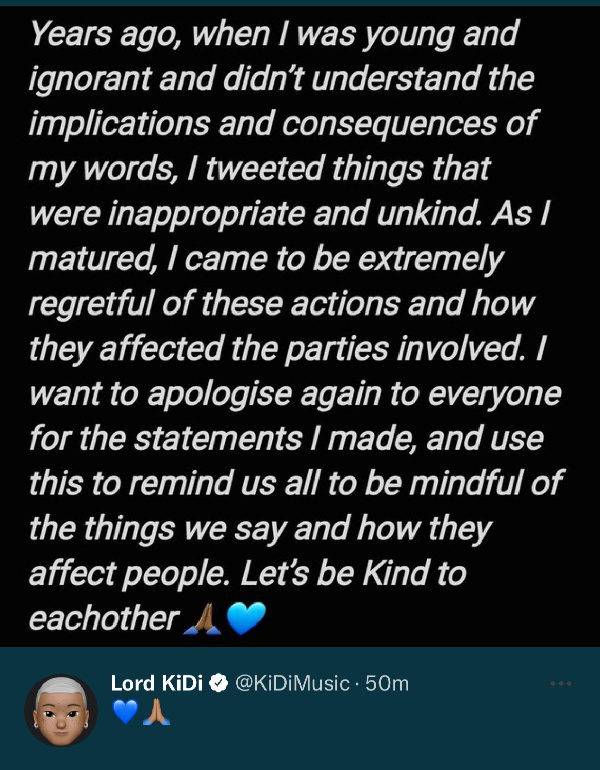