A one-time parliamentary aspirant of the New Patriotic Party (NPP) for Kpone Katamanso, Hopeson Adorye, has disclosed that he has officially left the National Security Secretariat.

In a post shared on Facebook, Hopeson Adorye said that he had officially handed over his duties at the secretariat.

Adorye, who was previously the Deputy National Security Coordinator in Charge of Airports, added that he had also been sworn out of office.

“Monday 28th November 2022 around 2 pm, I handed over to my HR at the National Security and sworn out of office. Thank you all. “Nyame nti y3b3 didi,” the post read.

Hopeson Adorye had previously announced on live radio this week that he had been fired from his government job.

He said during a discussion on Oman FM’s Boiling Point programme, on which he is a regular guest; that he had been fired purposefully because of his support for Alan Kyerematen.

Adorye is a vocal supporter of the Trade and Industry Minister in respect of the minister’s rumoured bid to lead the NPP as flagbearer when elections take place next year.

“God will cater for us, we will eat, uncle (referring to the show host), God has got us. How we toiled in opposition for Akufo-Addo to come to power, we will do same for Alan Kwadwo Kyerematen to come.

“I’m not a zombie, uncle, I was told that my support is not towards a particular camp so I should be dismissed, I have been dismissed. ‘Your appointment has been terminated with immediate effect.’ That is why I am stressing that God will cater for us, we will never die,” he stressed. 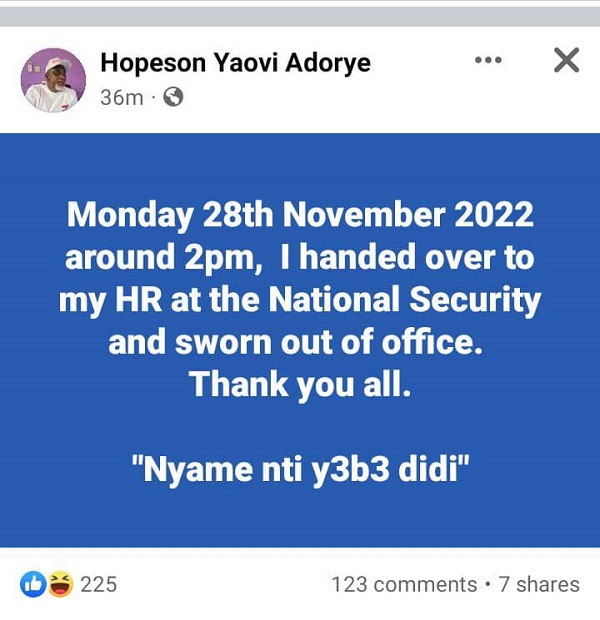