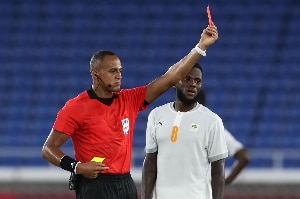 The American referee, Ismail Elfath, who will officiate Ghana’s game against Portugal at the 2022 World Cup, is a no-nonsense man.

The Columbus Crew, who had three Ghanaian players in their squad for that match, saw two of their players, Jonathan Mensah and Lalas Abubakar, get red cards in the game.

Jonathan Mensah, a former Black Stars defender, was the first to take an early shower in the game in the 35th minute when referee Ismail Elfath showed him a red card for bringing down C.J Sapong of Philadelphia Union.

Another Ghanaian player for Columbus Crew, Lalas Abubakar also faced the wrath of referee Ismail Elfath, as he got a red card after picking up a second yellow card 14 minutes to full-time.

The decisions of referee Ismail Elfath was heavily criticized by Columbus Crew manager Gregg Berhalter after they lost the game by 3-0 defeat to Philadelphia Union in MLS in 2017.

Five years after the incident, referee Ismail Elfath has been appointed by FIFA to handle Ghana’s first game at the 2022 World Cup against Portugal.

The Black Stars take on the Selecao of Portugal in their opening match of the tournament at the Ras Abu Aboud Stadium on Thursday, November 24, at 4pm.

Ismail Elfath will be assisted on the sideline by Kyle Atkins and Corey Parker as assistants with Stéphanie Frappart from France as the fourth official.

Elfath officiated his first match in 2011 and has since become one of the most respected match officials. He has won the MLS Referee of the Year award twice in the past three years. He officiated the semi-final of the 2019 Club World Cup.

Out of a total 264 matches, Elfath has issued 952 yellow cards, 65 red cards and has awarded 83 penalty kicks.