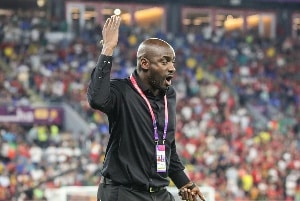 Otto Addo’s devotion to underwhelming players ultimately lost Ghana a sweet retaliation and qualification for the knockout stage of the 2022 World Cup.

The warning signs had been there, and if the disastrous performance against Brazil wasn’t enough to convince Otto Addo that certain players, regardless of their pedigree and reputation, needed to be benched, then the exhibition match against Switzerland and Portugal in the first Group H match should have.

It makes sense for a coach in charge of a young club to place his faith in the few seasoned players on the roster, but Otto Addo’s trusted players have consistently disappointed, especially when it counts the most.

There is the excuse of leadership and inspiration to be made for Andre Ayew but the obvious truth is that when it comes to what matters most which is producing performance worthy of satisfactory remarks, Andre Ayew has failed, not once, not twice, countless times in the last three years.

There is the curious case of Thomas Partey. Elegant at Arsenal, average in Ghana jersey.

As far as the Black Stars and most national teams are concerned, this is not a new phenomenon but this is where a coach is expected to be bold, overlook the stardom and pick less-popular players who deliver in national colors.

The Switzerland game should have provided the blueprint for how Otto Addo was going to deal with the Partey situation.

To be honest it is not an easy move to make and it is one which if not handled properly could upset the dressing room but after that performance by Salis and Elisha Owusu against Switzerland and Partey’s underwhelming performance against Portugal, Otto Addo should have drawn the line. Instead he remained loyal to a global star who once again delivered the opposite of his Arsenal form against Uruguay.

There is the conspiracy theory that he gets into the team because of his association with some key members within the Ghana Football Association but assuming without admitting that it is the truth, such influence, regardless of who it is coming will not be enough to get him into the starting team unless the coach himself is party to whatever scheme there is.

So regardless of what you think, Baba Rahman presence in the team is the sole decision of coach Otto Addo and the fact that he was drafted into the team after Gideon Mensah’s telling performance against South Korea shows the loyalty and faith Otto Addo had in him.

In return of Otto Addo’s loyalty, the Reading player has persistently displayed disastrous football which once again came alive in the game against Uruguay.

Baba Rahman’s was exposed and the Uruguayans had a field day cooking their attacks from that side. Unfortunately for him, his wing partner Jordan Ayew after that headline-grabbing performance against South Korea went back to default settings.

Inaki Williams came into the team with so much promise and it was understandable as the Black Stars lacked a player of his stature in the attacking area but in three games played at the World Cup where he played mainly in two positions, the Athletic Bilbao forward who switched allegiance from Spain to Ghana failed to deliver.

In all three games, two of which he played as a striker, not once did he hit a shot that was saved by the goalkeeper. Inaki had no shot on target in three games for the Black Stars and he was Otto Addo’s lead striker. How ridiculous.

The Ghana team showed so much promise and there is enough reason to be positive about the future but the undeniable truth is that Otto Addo’s blind loyalty led us into this ditch.