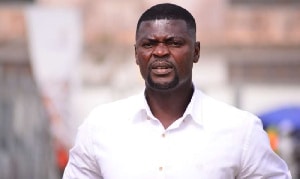 The two rivals have combined on social media to troll Hearts, who announced the dismissal of their manager on Tuesday, September 27, 2022.

In reply, Kotoko posted a hilarious video of Ghanaian comedian Ackah Ebenezer explaining a bad situation in the Ga language.

Great Olympics are the local rivals of Hearts, who always battle with the Phobians for bragging rights in the capital.

However, Asante Kotoko are fierce rivals of Hearts of Oak and battle with them for the bragging rights as Ghana’s greatest club.

Samuel Boadu leaves after a torrid start to the Ghana Premier League 2022/23 campaign, where they are without a win in their opening three matches.

Hearts of Oak lost to Aduana Stars before drawing their games against Great Olympics and Asante Kotoko.