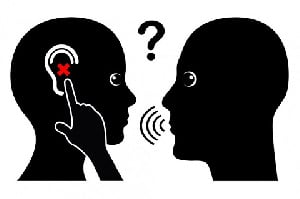 The excruciating hardship resulting from the poor state of the Ghanaian economy is terribly affecting persons with hearing impairment.

Many are struggling to afford at least one square meal a day let alone pay bills.

According to the 2021 Population and Housing Census, 8 percent of the Ghanaian population is living with a disability which translates to 2,098,138.

The United Nations estimates 80 to 90% of the hearing-impaired population in developing countries are unemployed.

Undoubtedly, this marginalized group of the population in Ghana are at the receiving end of the current harsh economic condition in the country with inflation hovering round 40.4% for October 2022.

Grace Amissah and her friend Soakpa Edow, both single mothers with hearing loss seen hawking at the Koforidua/Kumasi Lorry terminal say the current economic hardship is affecting them.

Grace Amissah lamented that, “I don’t come from Koforidua. She comes from very far. She comes to Koforidua to sell to take care of herself and the baby. But the business does not go well. I have family members but they do not help me with money. I have two deaf siblings. We suffer a lot. I am a single mother because my boyfriend abandoned me.”

On her part, Soakpa Edow said, “I have been suffering since my mother died and became an orphan. I was with my Auntie but she did not treat me well. I have been searching for a job but to no avail. So I sell pure water to take care of myself and of my kid. But the business is not going well because when they call me I don’t hear.”

Nii Aryee Ayiteh is also a hearing-impaired person. He sells second-hand footwear in Koforidua, the Eastern Regional Capital to take care of his family of three children and a wife.

However, he says his little capital is eroding due to the rising cost of footwear and transportation.

“We are not happy with the economic hardship in this country. Many people are suffering from poverty. The increased cost of living is too much. Transportation, so many things are all up. I travel to buy shoes and come and sell but because of the high cost of transportation, he can’t even travel so the cost of living is affecting him so much. When I even buy them and bring them to sell people don’t buy because people don’t have money so doesn’t make profit out of his business at all,” Aryee Ayiteh lamented through an interpreter.

Near Koforidua NIB Bank, is where Adu Afro also hearing impaired works as a cobbler but says the rising cost of materials used for the work is affecting the job.

“The cost of materials and substances used for mending shoes have increased,so I am unable to buy enough for my work. I buy it pieces. Whatever I get, I deduct transportation then use the little left to buy food to eat,” he said.

He appealed to the government to do something about the economy.

Another hearing-impaired, Isaiah Bentil, works with a sachet water company. He tied the knot last year, but Isaiah says life has become unbearable.

Isaiah spoke through an interpreter [Maxwell Lartey] that, “he is not happy at all about how the government is managing the economy. Life is now hard. He is not happy at all. The economy is very very bad. He works with one pure water company. Many people buy water from them but recently things have changed so the government should think about how to improve the economy if not people are suffering. Life is becoming so difficult”.

Cecilia Abrokwa Danso was spotted resting under a tree with some items in a polythene bag behind her.

Apparently, the hearing impaired has returned from the market. She went to buy some foodstuff to prepare meals for her family but lamenting that prices of food have increased hence could not buy the quantity needed.

“Prices of food at the market have increased. It wasn’t like this previously. We are suffering. The economy is hard. So the foodstuff that I bought, I will manage it well. Government must reduce prices,” she said through an interpreter.

The Ministry to Persons with Disabilities (MPWDs) at the Central Tabernacle of the Church of Pentecost in Koforidua is dedicated to the hearing impaired.

After fellowshipping with them Sunday, November 6, 2022, to gauge their mood on the current economic crises, the hearing impaired said they have been impoverished.

They said most of them are jobless due to employees’ reluctance to employ them but few who are engaged in petty trading are not making any profit to enable them to take care of themselves and their families.

The hearing impaired persons Ahmad Abu, Rakia Lartey and Mrs Florence Aryee Ayiteh said due to challenges in accessing information, they are always met with shock when confronted with new prices of goods and transportation fares.

“The economy is now difficult. Which way can we get money or get employment.No one feels okay everything is difficult. We wish that some people can help the hearing impaired” Mrs. Aryee Àyittey said through an interpreter.

Elder David Asante Agyei, presiding Elder of the MPDWs at the Church of Pentecost appealed to Government to support effort of the Church to support the disable especially in these difficult times considering that majority are unemployed.

“The government must step up in terms of caring for the Disables. we see the church of Pentecost employing persons with disability. So as the Church is moving this way we entreat the government to actually come because the church cannot do all. Disable people they also cast votes (I don’t want to sound political). The Minister responsible for women, children and social protection to intervene because most of these people do Kayaye “.

Ghana is a signatory to UN convention on Rights to Persons with Disabilities.

Additionally, the country has passed the Persons with Disability Act 2006 (Act 716).

Section 9 of the Act enjoins the Ministry of Women, Children and Social Protection in collaboration with government agencies to create employment opportunities for persons with disability and provide interventions for social support.

The Eastern Regional Chairman of Ghana Federation of the Disable Organizations (GFDO) Daniel Agyekum said in an interview that, many persons living with disability are unemployed in the region therefore the current economic hardship is having serious consequences on the members.

He cited an example that, “visually impaired persons for instance mostly had to pay double transportation fares for himself and his the person assisting him whenever travelling”.

Daniel Agyekum stated that disbursement of the disability fund is inadequate hence must be increased to help persons with disability.

“Most of the members don’t receive the money and those who get the money, looking at the economy if a person wants to work or needs funds to start a business if you give the person Ghc800 or Ghc1000 it cannot do any meaningful work. So the common fund has been coming but it is not supporting enough. I will like to urge District Assemblies to increase the money to our members so that they get capital for trading. We are pleading with the government to increase the percentage of the money that comes to the district Assemblies so that the members can also get huge sums to start businesses” Daniel Agyekum said.