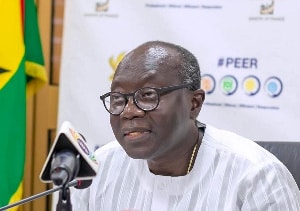 Ghana will implement a debt exchange scheme, according to Finance Minister Ken Ofori-Atta, due to the country’s unmanageable debt levels.

Mr. Speaker, despite the elevated levels of debt, the government is still committed to making sure that debt is reduced to levels that are manageable in the medium to long term.

“To this end, we will implement a debt exchange programme to address the challenges identified in the portfolio in collaboration with all relevant stakeholders including the Ghanaian public, the investor community, and development partners,” he said.

The Minister of Finance, Ken Ofori-Atta, is in parliament to fulfill his constitutional mandate by presenting the government budget to the House.

The minister is presenting the 2023 Budget Statement and Economic Policy to parliament in a year that has experienced perhaps, the worst forms of economic downturns in the fourth republic.