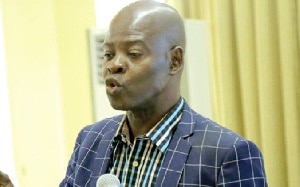 Dr. Steve Manteaw, co-chair of the Ghana Extractive Industry Transparency Initiative (GhEITI), has expressed concern about the readiness of the Ghana National Petroleum Corporation (GNPC) to wean itself off of government financial support by 2026, as required by law, claiming that the company is not putting enough measures in place.

According to him, the government is compelled to support the corporation financially for 15 years beginning in 2011 and ending in 2026 by the Petroleum Revenue Management Act (PRMA), Act 815 section 7 (3).

The corporation, however, has over the years not managed its income adequately to ensure that it is able to stay independent, make a profit, and even pay dividends to the state, leaving it with just around four years to fulfill the set timetable.

“GNPC’s operations are pretty difficult.
According to its own statute of organization, PNDC Law 64, GNPC should be financed by loans by borrowing money on the financial market and investing it in its operations. If it is successful, it should then repay the loans and distribute any profits to the state as a dividend.
However, the PRMA altered that somehow and declared that the government will feed them for 15 years with a silver spoon.

“However, we have not seen how GNPC has laid the way to enable it generate revenue and pay dividend to the state when weaned off in 2026. And so, my fear is that by end of 2026, GNPC will not be ready to be taken off the budget; so we may have no option than to extend the time – which would be very unfortunate,” Steve Manteaw added.

Citing examples from best practices elsewhere, he indicated that BP PLC is a British company that is headlining their oil and gas operations, while ExxonMobil is also playing active role for the USA. These firms also go outside their jurisdiction to operate and generate more revenue and repatriate profit to their country, and so GNPC is supposed to grow to such status and generate revenue for the state; but as it remains, the manner of operation only gives room for foreigners to generate revenue and repatriate same to the detriment of the nation.

The Ghana Extractive Industry Transparency Initiative (GhEITI) 2019 report, launched recently, indicated that the corporation received a total amount of US$279.23 million for the full year of 2019.

Dr. Manteaw believes that if stringent measures are not taken to diagnose the operation and use of GNPC revenue of which some are used for quasi-financial projects, it cannot be weaned off government subvention.

This arrangement would be in place for 15 years from date of the promulgation of the Act in 2011. Thus, it is expected that the funding arrangement will cease in 2026, he explained.

The GhEITI report found out that GNPC has engaged in several quasi-fiscal expenditures (QFEs) such as road construction, building infrastructure projects, among others, and transactions with other SOEs.

It is, therefore, recommending that GNPC should be reimbursed with all its QFEs advances as soon as possible. Where such reimbursements cannot happen in the short term, government should enter into repayment agreements to ensure that within a reasonable timeframe, GNPC is able to access the money to ensure that it is able to use it for the purpose for which it was allocated in the first place.

Again, it urges government to cease forthwith, the practice of urging GNPC to engage in quasi-fiscal spending any time it needs to meet a contingency.

He called for all stakeholders to stand up to diagnose the problems of the corporation and find solutions to ensure that the country would not have to extend the timeline.

He also emphasised that it was time to discourage political interference in the operations of entity and allow it to operate as a professional corporation.