Ghana’s issues are being caused by Bawumia – Hanke 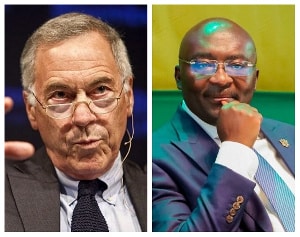 Vice President Dr. Mahamudu Bawumia is the root of the nation’s troubles, according to Johns Hopkins University professor of Applied Economics Steve Hanke.

He asserts that despite the Vice President’s stated intention to address the nation’s problems, he is actually doing the reverse by causing more of them.

Professor Hanke’s statement is in response to the Ghana Cedi’s decline in value versus major trading currencies, particularly the US dollar.

The vice president of Ghana, Bawumia, claims he entered politics to aid in problem-solving.
SPOILER: Bawumia is the one who is causing the issues.
On September 20, he tweeted, “Today, I measure GHA’s inflation at a shocking 81%/yr, nearly 2.5 TIMES the official rate.

Professor Hanke who has taken a keen interest in the economic issues of Ghana in a separate tweet said Ghana’s economy was tanking – an expression which means the economy is down and there are fears of a recession.

He has in the past blamed the Akufo-Addo-led administration for putting the economy in a dire situation.

“Ghana is in 8th place in this week’s inflation table. On Sep 8, I measured Ghana’s #inflation at a stunning 81%/yr–over 2x the official inflation rate of 34%/yr. #Ghana’s economy is TANKING. To rein in inflation, GHA must install a currency board,” he tweeted on September 19.

“Today, I measure #Ghana’s inflation at 81%/yr. As a result, Ghanaians don’t know the price of anything anymore. When Ghanaians see their grocery bills soar, they can thank Pres. Akufo-Addo,” Prof Hanke further teased.

Ghana’s economy has been hard hit according to the government by the ravages of the COVID-19 pandemic, the ongoing Russia-Ukraine war and banking sector clean-up.

The rippling effect has been an increase in the cost of living, record high inflation rates and downgrades of the economy by rating agencies such as S&P and Fitch – a situation which has dealt a heavy blow to government’s ability to access the international capital market.

The Cedi has also been on a free fall compelling the Bank of Ghana to resort to hiking its monetary policy rate to deal with the situation.

The worsening economic situation compelled the government in July to initiate contact with International Monetary Fund for an economic support programme.

Ghana is said to be targeting an amount of US$3 billion over three years from the International Monetary Fund once an agreement on a programme is reached. The new amount requested as a loan was double the government’s initial target of $1.5 billion.

Government hopes to complete negotiations by end of the year in order to receive the funds in the first quarter of next year.

The personal touches in Her Majesty’s colourful funeral flowers

The personal touches in Her Majesty's colourful funeral flowers