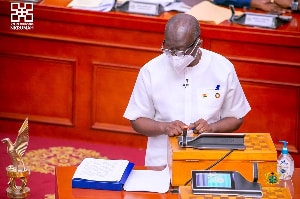 Cassiel Ato Forson, the spokeswoman for the minority in parliament, has issued a warning that the 2023 budget will make Ghanaians’ situation even worse.

He asserts that the implementation of the 2.5% rise in the value-added tax will result in a further increase in the price of products and services.

Ato Forson spoke with the media after presenting the 2023 budget “The people of Ghana will continue to experience agonising sufferings as a result of increased taxes.
Unfortunately, the Minister’s announcement of spending reductions did not outline their intended method.”

“The things he outlined there are nothing but empty. What we can see is that the government is shifting the adjustment programme to the ordinary Ghanaian where the taxpayer will be made to pay more,” he said.

Government has announced an increment in Value Added Tax (VAT) by 2.5 percent for consumers of goods and services.

The move, according to government is expected to improve their domestic revenue measures while seeking to reach an IMF deal to restore macroeconomic stability.

“Mr. Speaker, we will undertake the following actions, initiatives, and interventions under the seven-point agenda. To aggressively mobilize domestic revenue, we will among others: Increase the VAT rate by 2.5 percent to directly support our roads and digitalization agenda; Fast-track the implementation of the Unified Property Rate Platform programme in 2023; and Review the E-Levy Act and more specifically, reduce the headline rate from 1.5% to one percent (1%) of the transaction value as well as the removal of the daily threshold,” he said.

The Minister of Finance, Ken Ofori-Atta, made this known in parliament when he delivered the 2023 budget before lawmakers on Thursday, November 24, 2022.

Taliban carry out their first public execution since seizing power