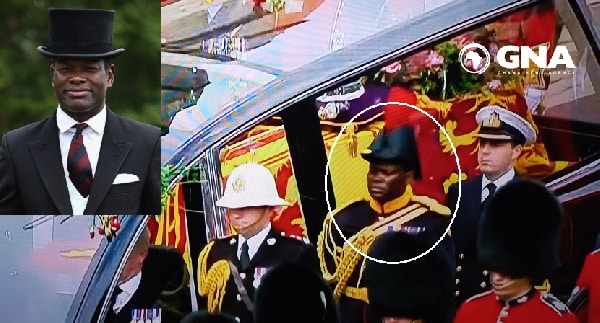 He was the only Black officer among a group of over a dozen who marched alongside the cortège after the official funeral on September 19, 2022.

Former UK High Commissioner to Ghana, Jon Benjamin, was full of praise for Twumasi-Ankrah, who served as the late monarch’s Personal Assistant – as her equerry.

Major Twumasi-Ankrah was appointed as Queen Elizabeth II’s equerry in 2017, making him the first black man to hold this position.

An equerry’s primary responsibility is to assist the monarch during official activities such as public visits and receptions at Buckingham Palace.

An equerry’s primary responsibility is to assist the monarch during official activities such as public visits and receptions at Buckingham Palace.

According to his military record, he is a member of the Household Cavalry and a veteran of the Afghan war.

He was born in Ghana in 1979 and moved to the United Kingdom with his parents when he was three years old, in 1982.

He served in the military his entire life, having been commissioned by the Blues and Royals at the time. He was the first black African officer in the British Army’s Cavalry of the Household.

Major Twumasi-Ankrah said on camera for a documentary about Britain’s open and democratic society;

As a young child, watching her majesty the Queen’s birthday parade on television, I would have never imagined that one day I’d command the regiment which I’d fallen in love with.”

“From where I sit and from what I’ve seen in the UK, our cultures really do mix and intermingle, and if I’m not a good example of that I really don’t know what is.”

NPP outspent us in the 2020 General Elections – Afriyie Ankrah

NPP outspent us in the 2020 General Elections - Afriyie Ankrah