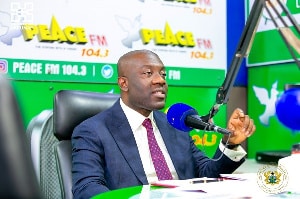 Information Minister Kojo Oppong-Nkrumah has warned that Ghana might soon be unable to export cocoa and coffee to some international markets.

According to Oppong Nkrumah, the ban might happen because of a new legislation in Europe.

In a post shared on Facebook, the minister indicated that the government was warned of this move by the Ghana Embassy in Belgium, which has started working to ensure that the ban does not come into force.

“In Europe, there is a new legislation that could soon make Ghanaian cocoa and coffee unexportable to many international markets.

“The Ghana Embassy in Belgium under the leadership of Ambassador Sena Boateng has moved swiftly to bring this to the attention of the Government of Ghana. It has also commenced work on realigning Ghanaian and European interests in cocoa and coffee,” parts of the post read.

He added that Ghana and other cocoa-producing countries in the West African sub-region must act swiftly to ensure that they are on the same page with European countries.

“Ghana and Côte d’Ivoire need to act quickly to secure the industry while meeting the interests of European markets else millions of households and our entire economies could be significantly affected soon,” he said.

The European Commission in November 2021 tabled a legislative proposal that aims at curbing deforestation and forest degradation driven by the expansion of agricultural land used to produce specific commodities, namely cattle, cocoa, coffee, palm oil, soya and wood, as part of its efforts to reduce the emission of greenhouse gases.

The legislation will mandate European countries to come up with regulations that will ensure that their import of these commodities from countries like Ghana are not only legal but are harvested, extracted and processed in a sustainable manner.

“The proposed regulation should cover high-carbon stock and biodiversity-rich ecosystems other than forests (such as wetlands, peatlands or savannahs), to avoid the problems of conversion and degradation being shifted to these landscapes,” parts of the legislation read.

The commission also indicated that sanctions on exporting countries who fail to meet the set standards should include a ban on their export.