Germany: Explosion in a public restroom linked to deodorant spray

Tuesday night, an explosion shook a building in the eastern city of Halle and caused evacuations. According to the police, three people were hospitalized with serious injuries.

According to authorities, burning deodorant spray bottles may have caused an explosion in a public lavatory in Halle, in eastern Germany.

After police found several bottles of deodorant spray at the scene, a spokesperson said: “There is a suspicion that these are tied to the incident.”

Specialists from the city of Magdeburg were on the ground Wednesday to assist Halle police in the investigation.

Witness to Halle explosion: ‘The walls were really shaking’

The area immediately surrounding the restrooms in Halle’s late-Renaissance Market Palace, a patrician home in the historic city center, was rocked by the blast, which occurred at about 6 p.m local time.

A woman employed at a nail salon next door reported hearing a loud explosion, saying: “The walls were really shaking.”

The sight of the building’s rear exterior wall gives evidence of the power of the explosion. The roof above it was torn off its anchors and the wall itself was cleaved away from the rest of the building, though remains standing.

Following the blast, police evacuated buildings within a 100-meter (330-foot) radius, halted all traffic, and searched the area for gas leaks.

After firefighters, emergency services, and police finished their work, they lifted the evacuation, and traffic was allowed to resume.

In the end, police characterized the incident as “a tragic accident.” 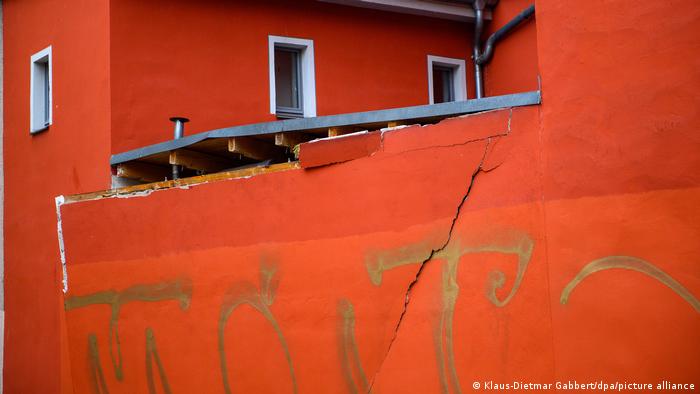 On Wednesday, businesses near the scene also resumed normal operations. The public restrooms, however, remain closed.

No financial estimate was given for the damage.

Nor was further information given on the state of the three individuals who were hospitalized.