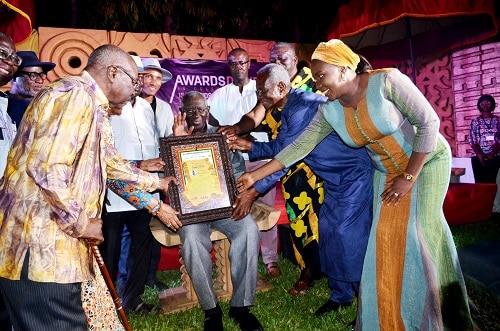 Fourteen awardees described as legends of journalism and promoters of free speech were on Wednesday night honoured in Accra.

Former President, John Agyekum Kufuor, was also honoured for his role in the country’s media space and for repealing the Criminal Libel Law.

MrEnimilAshon, Executive Director of Centre for Communication and Culture, said that the awards was under the “Ghanaian Media, The Bold, Beautiful, the Ugly and the Maverick” project which would be rolled in three packages, including interviews on television , a 200-page book on the lives and times of the legends.

Commending the legends, he said he was hopeful that present and future journalists would fight for the same course.

An Economist, Kwame Pianim, commended the legends for chalking such feats, adding that there was the need to also honour the spouses of these legends who stood by them in those trying times.

He extolled the former president for his role in the media space and indicated that maintaining free speech and press freedom required the efforts of all and sundry.

MrPianim noted that we could have the Ghana we wanted if we applied selflessness, discipline and the rule of law.

“We are a young nation with a mission to be a shinning beacon of Africa so it is not the institutions but we Ghanaians. We need to have the courage to speak our minds,” he stated.

“We have an attitude that an elder does not err and that is doing us lots of bad than good and we have to work on that,” he added.

The economist recommended that the organisers go beyond the giving of just plaques to the legends, adding that the GJA could establish a fund with support from the government to help these legends.

The President of the GJA, Mr Albert Dwumfuor, hinted that the Association would soon introduce the GJA retirees support fund to support some of these legends who were faced with financial challenges.

He congratulated the legends for the pace set, adding that he was hopeful that young journalists would carry on with what they have learnt from them to continue to make the country a better place.

These celebrities will marvel you with their fashion choices

Stonebwoy uncovers evil agenda against his career by industry players

Stonebwoy uncovers evil agenda against his career by industry players