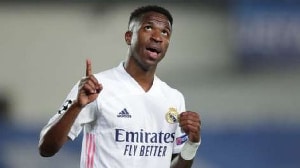 Football fans across the world have condemned the racist chants targeted at Real Madrid’s Brazilian players by fans of Atletico Madrid.

In the Madrid derby played on Sunday, September 18, 2022, Vinicius Junior, Rodrygo Goes, and Eder Militao were racially abused by fans of Atletico Madrid.

In and outside the Wanda Metropolitano which is Atletico’s home, videos of fans hurling monkey chants at the Brazilian players trended on social media.

Local media also reported that monkey noises and chants of “Vinicius, die” were heard throughout the game.

The latest racism act from the Atletico Madrid fans follows a video in which Vinicius spoke out against racism after players of Real Mallorca hit out at him for dancing and showboating during a game.

As the conversations waged, football agent Pedro Bravo, a guest on a Spanish TV show made racist remarks referring to Vinicius as “monkeying around”, and invited him to leave the dancing to the “Sambadrome”.

In the game, Real Madrid defeated Atletico 2-1. Rodrygo shot Madrid in the lead inside 18 minutes before Valverde added the second. Hermoso grabbed the consolation for Atletico.

The racist chanting aimed at Vinicius outside the Metropolitano tonight is disgusting, depressing and, sadly, entirely unsurprising. Atleti have had a major problem with this group (who are literal Nazis) for years and chosen not to act. Until they do so, it will keep happening.

Atletico Madrid fans are scumbags. Disgusting and despicable behavior from the lot. I feel for Vinicius Jr.

King Charles requested flowers for the wreath, which also included a personal message

King Charles requested flowers for the wreath, which also included a personal message