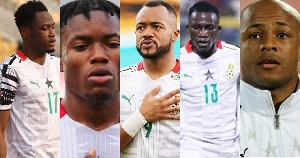 After the international break in September, the Black Stars players came under scrutiny and received criticism.
Nearly every player on the team was criticized after Ghana’s allegedly lackluster performances against Brazil and 139th-ranked Nicaragua.

However, certain players have faced more backlash and criticism than others, and people will have differing views on whether or not they should be included in the final World Cup roster.

Many people think Jordan Ayew ought to be benched because he hasn’t scored for the Black Stars and has received harsh criticism for it.

Other Ghanaians, however, believe the Crystal Palace forward brings more to the team than just goals, and thus his presence is required.

The critics have claimed that Felix Afena-Gyan is too young and inexperienced to lead the Black Stars’ attacking line. He should thus be sacrificed.

While some believe he can lead the line, the Black Stars are short on playmakers who can feed him the ball.

Many Ghanaians believe that, despite having a high ceiling, Issahaku Fatawu should be dropped from the squad. Some argue that his play lacks maturity and that he should be allowed to develop at Sporting Lisbon before being drafted back into the national team.

Others believe he has a lot to offer the team but appears to be overburdened by his starting spot.

Many believe the Black Stars captain has passed his prime and contributes little to the team when he plays. As a result, he should be dropped from the starting lineup or the team entirely.

Another school of thought holds that Ayew’s experience is essential in the team, if for no other reason. In addition, given his goal-scoring record against the available attackers, playing offensive right behind the striker will be ideal because he is potent.

Dede has scored 73 goals in 107 appearances for the Black Stars.

Baba Rahman has not been a better version of himself in recent Black Stars games, and some Ghanaians believe he should not be with the team for the World Cup.

Meanwhile, some believe that betting on Gideon Mensah, Baba’s backup, is a huge risk. At least, Baba has seen it all and could weather the storm when the going gets tough.