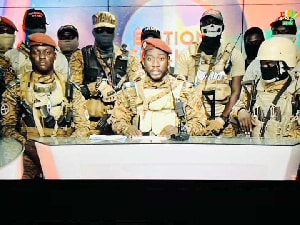 The West African regional bloc, Economic Community of West African States, ECOWAS, has condemned the September 30, 2022 coup that took place in Burkina Faso, where a new military junta overthrew another.

What started out as an exchange of heavy gunfire on Friday morning was confirmed late in the evening with a broadcast on National TV announcing the takeover.

In a statement issues from the ECOWAS Commission hours after the announcement, the bloc said it firmly condemned the incident at a time the Sandaogo Damiba-led junta was making progress on an orderly return to constitutional order by July 1, 2024.

The junta said a new leader – civilian or military will be be announced in due course, but before that some measures put in place include dissolution of the government, the Transitional Legislative Assembly (ALT), and the Transition Charter as well as the closure of borders.

The Economic Community of West African States (ECOWAS) condemns in the strongest terms the seizure of power by force which took place Friday, September 30, 2022 in Burkina Faso.

ECOWAS finds this new coup inopportune at a time when progress has been made, thanks to diplomacy and the efforts of ECOWAS for a methodical return to constitutional order no later than July 1, 2024.

ECOWAS reaffirms its unreserved opposition to any taking or maintaining of the
power by unconstitutional means and demands scrupulous respect for the timeline already agreed with the Transitional Authorities for a swift return to constitutional order no later than July 1, 2024.

ECOWAS warns any institution, force or group of people who by acts would prevent the programmed return to constitutional order or would contribute to the weakening of peace and stability in Burkina Faso and the Region.

The ECOWAS Commission remains seized of the development of the situation.

The President of the Commission

How the coup was announced:

A coup d’etat was announced by one Captain Ibrahim Traore on state TV flanked by fully armed and masked soldiers.

Reports of heavy artillery gunfire in the wee hours of Friday morning and heavy military presence in parts of the capital Ouagadougou raised fears of a takeover.

But the Presidency in a statement on Facebook said negotiations were ongoing and that an enemy was seeking to sow division between the people.

The state broadcaster went off for hours and returned to normal programming. But this evening, a group of armed soldiers appeared on the state TV to announce a takeover according to multiple reports.

The new junta announced that they have deposed Damiba as leader of the same coup vehicle that came into power in January, hence they are only taking over the leadership of the MPSR.

They cited the continued degradation of the security situation in the West African country as basis for their action.

They have also promised an immediate reorganization of the military with the view to halt the terrorist attacks and to restore durable security across the country.

Watch the address (in French) of the coup leader below:

On May 24, 2021, Mali’s President, Bah N’daw, Prime Minister, Moctar Ouane and Minister of Defence, Souleymane Doucoure were captured by the Malian Army led by Vice President, Assimi Goita as the head of the junta.

They subsequently announced that N’daw and Ouane were stripped of their powers pending new general elections to be held in 2022.

This was the second time Goita had grabbed power, he emerged as the coup leader when late President Ibrahim Boubacar Keita was removed in 2020 on the back of mass protests arising largely from insecurity.

Guinea experienced a coup, on September 5, 2021, when its President, Alpha Condé, was captured by the country’s armed forces after gunfire in the capital, Conakry.

Special forces commander Mamady Doumbouya released a broadcast on state television announcing the dissolution of the constitution and government.

Burkina Faso recorded a coup on Monday, January 24, 2022. The country’s Army, led by Lieutenant Colonel Paul-Henri Sandaogo Damiba confirmed that it had dissolved the government and the national assembly, as well as closed the borders.

Damiba will go on to announce a reconciliation body and meet with other stakeholders including regional leaders with the view of transitioning to democratic rule in the shortest possible time.

As recently as a week ago, he defended the January coup describing it as necessary and calling for concerted effort to combat terrorism in the region when he spoke at the 77th United Nations General Assembly.

Kumasi and its people are an important priority for the U.S – U.S Ambassador