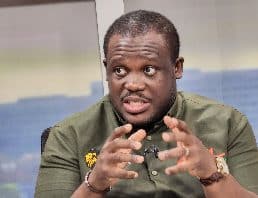 A member of parliament for Ningo Prampram, Sam Nartey George, has ridiculed President Akufo-Addo over his jovial plan to wed a new wife, especially one from the Volta region.

President Akufo-Addo disclosed this in an interview on a local radio station in the Volta region during an official visit.

The president stated that witnessing the female presenter who granted him interview revived his motivation to keep working toward that goal.

“You know my basic position that I’ve taken, and seeing you, of course, it’s heightened it: my determination to marry in the Volta Region, and that I’m like a suitor who keeps on knocking on the door, looking forward to the day the door will be open. We’ll keep on till the day the door is open,” he said.

However, Sam George a social media post has questioned whether the president’s intentions to find a new wife a major priority in the midst of the economic crisis.

“Hehehehehe! Addo Showboy nunu. I can testify about the Ayigbe Toffee but in this hard times, is a new wife Bossu’s top priority? Ah well,” he tweeted on September 17.

The economy has suffered a downturn in recent months with inflation rate hovering around 33.9% per data from the Ghana Statistical Service.

The Cedi has also significantly depreciated with the economy also hard hit by recent downgrades by international rating agencies such as Fitch and S & P.

Government has partly blamed Covid-19 and the Russia-Ukraine war as cause for the increased cost of living while promising to implement measures to curtail it.

It is consequently seeking a $3 billion IMF credit facility over a three year as it finds its way out of the economic quagmire.

Addo Showboy nunu. I can testify about the Ayigbe Toffee but in this hard times, is a new wife Bossu’s top priority? Ah well! ????????‍♂️https://t.co/6LF4NDfI9n