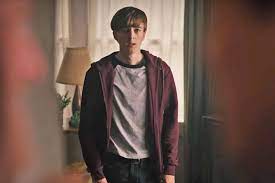 Share on FacebookShare on Twitter
Actor Ryan Grantham, known for a brief role in “Diary of a Wimpy Kid” and appearances on “Riverdale,” has been sentenced to life in prison for fatally shooting his mother.
Grantham, 24, pleaded guilty to second-degree murder for the 2020 killing of Barbara Waite, 64, as she played piano in their British Columbia home. He’ll be eligible for parole in 14 years, CBC reported.Grantham is known for a number of roles over his career, including the 2010 movie “Diary of a Wimpy Kid” in which he played a student portraying a shrub in an on-stage adaptation of “The Wizard of Oz.”He also appeared in “Riverdale” as Jeffery Augustine, a teenager who hits Fred Andrews with his father’s truck and kills him.

Grantham confessed to the murder in a GoPro video and showed off his mother’s body, according to evidence presented in court.

“I think he’s pretty apprehensive about the whole thing. He’s a fairly tiny person, and to go to the prison system, I’m sure it’s a daunting and scary thought for him,” Johnson said.

Cocoa freight charges up 5% for all destinations, but UK stayed

Cocoa freight charges up 5% for all destinations, but UK stayed