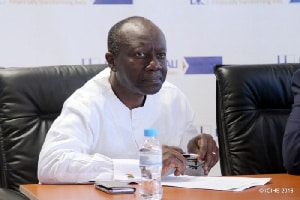 Mangowa Ghanney, a former director of the Ministry of Finance’s legal division, has stated that contracts for Ofori- Atta’s Databank have not been given out “fraudulently.”

He thought Databank was among the top contenders for federal contracts.

And before Ken Ofori-Atta was appointed finance minister, Databank was already conducting business with the government, he said.

“And as far as I’m aware, Databank has never received anything on a silver platter.
Asaasenews.com quotes him as saying, “Databank has always had to compete with any other organization to be a part of what the Ministry of Finance does.

The former director also noted that Databank’s involvement in the government’s business was a result of the Ministry of Finance’s encouragement of local participation among Ghanaian businesses.

“Ministry of Finance has for a few years now, had the policy to encourage local participation, and to do this we always tendered when there were projects available, and we evaluated and picked the best responses, and Databank happened to be one of those companies that we picked.

“The Ministry of Finance has worked with Databank, and we have worked with them and with other local financial institutions because they presented themselves as able to present the task,” he added.

The finance minister has come under intense pressure to resign or be removed after various allegations have been levelled against him.

One of such is the awarding of contracts to his bank, Databank where the Bank benefits from loans that Ghana borrows.

But the finance minister denied the allegations saying they were “unfounded and untrue”.