‘Data is the new oil, it can generate a lot of revenue for the state’ – Ursula Owusu-Ekuful 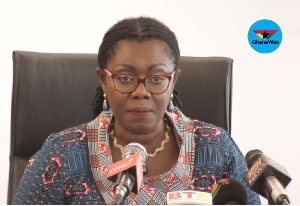 Even though the government now receives income from other sources, oil has historically been Ghana’s main source of income.

Even if the government has taken steps to ensure that citizens pay their taxes, Ursula Owusu-Ekuful, the minister of communications and digitalization, has revealed another source of money.

She claims that when correctly examined, the use of data can bring the state enormous sums of money.

Speaking in a media interview on the sidelines of Ghana digital economy policy document workshop held in Accra, the Communications and Digitalization Minister, Ursula Owusu-Ekuful said government will focus on safeguarding data collected, analyze and utilized properly for the better of the Ghanaian economy.

“If you look at the revenues that these tech giants are generating from managing, analyzing and utilizing the data that we freely give them, the Facebook, google, WhatsApp and all those mega-platforms, then it gives effect to the saying that data is the new oil because if we effectively analyze and utilize it properly, it can generate a lot of revenue for the state for our own development,” she said.

“So it’s an area that we need to focus on critically as a matter of urgency going forward as we look at other means of raising revenues to finance or own development and we are determined to do that,” Ursula Owusu-Ekuful stated.

She urged Ghanaians who were yet to complete the SIM card re-registration process to do so before the November 30, 2022 deadline.

The Minister said the affected Ghanaians will not have access to data and their SIM will be de-activated if they fail to meet the November ending deadline.

She said a total of 20,892,970 subscribers have so far completed the SIM card registration exercise.