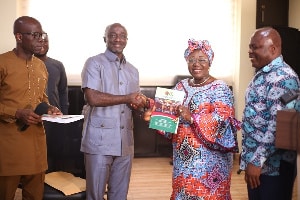 The State Interest and Governance Authority (SIGA) has identified some infractions which have culminated in various financial mishaps as captured in the 2021 Auditor General’s report on Ministries Departments and Agencies.

According to the Director General of SIGA, Ambassador Edward Boateng, there has been a lack of effective supervision, monitoring and evaluation on the part of CEOs, Heads of Finance and others.

Speaking at the presentation of the 2021 Audit Infractions Joint Report on January 24, the SIGA Director-General stressed that the heads of these state-owned enterprises continue to make what he described as ‘rookie mistakes’.

“A lot of the CEOs do not pay attention to the Auditor General when they assume office,” he noted.
“The second finding from our report showed that in a haste to achieve certain goals within Specified Entities, there is a lack of due process on the part of persons within the organisation. Also, we realised there was misapplication and misappropriation of funds in certain instances,” Ambassador Edward Boateng said in his findings of the report.

The SIGA Director-General added that some defaulters have since been cited in its 2021 Audit Infractions Joint Report for the appropriate sanctions to be taken against them.

“There is also the issue of Risk Management which has been identified in the report and this must be brought to the attention of government to ensure that persons put in key positions must understand the results of their actions and inactions,” he added.

He further pointed out the lack of collaboration between auditors and Specified Entities.

“We realised that some of these CEOs did not take seriously their exit interviews prior to assuming office and this is something that has been key to the infractions captured in the 2021 Auditor General report,” Ambassador Boateng stressed.

The SIGA boss said many institutions have also been saddled with a lack of financial support which forces them to operate on tight conditions while taking certain decisions which later result in these infractions.

Touching on some recommendations captured in SIGA’s 2021 Audit Infractions Joint Report, Ambassador Boateng charged the Heads of Specified Entities to have adequate training on their various Acts governing Specified Entities.

He noted that training on the Public Financial Management Act 216, Act 921 and its regulations as well as the Public Procurement Act must be compulsory for Heads of Specified Entities.

The SIGA Director General in his concluding remarks charged the Boards and Chairpersons of the Specified Entities to undertake a thorough implementation of the audit findings.

“What we realised was that a lot of the issues captured in the 2021 Audit Report date back to many years and more and the challenge is if these issues are not resolved, they will keep recurring in subsequent reports which in turn makes the government look bad.”

“We need to effect the report’s recommendations to achieve the President’s vision of Specified Entities contributing significantly to Ghana’s GDP,” he concluded.

Receiving the report on behalf of the President, the Chief of Staff, Akosua Frema Osei-Opare, reiterated the President’s unwavering support for the SOE sector.

She noted that Akufo-Addo’s “strong belief in public enterprises is rooted in his vision of putting Ghana in charge of her own destiny by transitioning the country’s economy to a prosperous and self-sustaining one.”