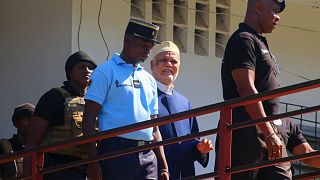 A court in the Comoros on Monday (Nov 28) handed down a life sentence for high treason to ex-president Ahmed Abdallah Sambi.

The 64-year-old was convicted of selling passports to stateless people living in the Gulf.

Sambi headed the Indian Ocean archipelago between 2006 and 2011.

In 2008, he passed a law allowing the sale of passports and was accused of embezzling millions of dollars under the scheme which was since referred to as “economic citizenship” scandal.

But Sambi’s French lawyer, said there is no evidence of this money — “no account discovered”.

Sambi refused to attend the trial, as his lawyers said there were no guarantees he would be judged fairly. He appeared once with his defence asking the judge to recuse himself since he had previously sat on the panel that decided to indict him.

The rulings by the State Security Court, a special judicial body cannot be appealed.

Sambi is an opponent to current president Azali Assoumani.