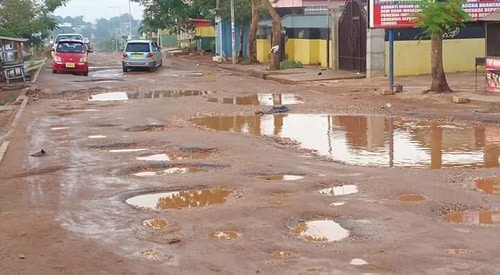 Commuters along the Damongo-Larabanga-Sawla stretch of the Fufulso-Sawla Highway in the Savannah Region have expressed disappointment over what they say is shoddy work coupled with poor maintenance that has left the stretch in a deplorable state in less than 10 Years after construction.

They say the situation has undoubtedly, left several kilometers with disjointed patching of potholes, making it difficult for motorists and other commuters to use.

The 175 kilometers Fufulso-Sawla road was constructed between the years, 2014 and 2015 and in less than 10 years, it is in terrible shape. Commuters say this forces drivers to drive at a slow pace thereby, exposing them to robbers.

“Due to the bad nature of the road, one travels for seven hours and given the nature of communities around here and the high rate of robbery, people can just take advantage of the portions that are not asphalted and rob travelers. I think if Government does something about it, we would be very grateful”, Nyandia Yakubu stated.

Another commuter said, “Actually, the road has been so bad to the extent that we (commercial drivers) passing here like you saw me passing, I’m supposed to drive slowly but if I do, I will get a flat tyre and again, when you meet a car from the opposite direction (from Larabanga ) towards Damongo and you don’t take time, you are going to lose control because the road is always dusty and I can tell you that many accidents have happened to my colleagues. So, I think Government should do something about it for us”, Adam Osman said.

The road was constructed with a loan facility of $95m from the Africa Development Bank to link three Regions, Northern, Savannah, Upper West and Burkina Faso to the rest of the country.

However, the Damongo- Sawla portion started wearing off in the year 2019.

But the Kanato-Sawla portion of the highway started developing problems as early as 2017 and the road users called for it to be asphalted to save that portion.

And according to another commuter, Seidu Elijah, “yes, the whole stretch should have been asphalted especially if you look at the nature and what has been done earlier, we don’t expect to see the road in this state and I think the call for it to be asphalted will be an excellent call”.

Iddrisu Sabori is a taxi driver plying the Larabanga-Damongo stretch. And while recounting his daily ordeals on the road, he said regarding accidents, “a whole lot of them around here. The government said the road wasn’t properly made and they were coming to make it better and I do not know whether this is the correct way or not. They left it like this for more than three years “, he bemoaned.

“They destroyed this place by telling the Community (Larabanga) that they wanted to re-do it better for us but since they did that, no Contractor has come here to do anything.

A lot of accidents have been happening here, motorbikes, cars and so many machine parts scattered on the road”, Gafaru Seidu insisted.

Three years ago, the Damongo Larabanga portion of the road was awarded on contract to a Road Construction firm, Lesken for maintenance of the portions destroyed but that is yet to be executed after over three years.

Residents along that stretch, especially school children have been lamenting over the dust and its health hazards.

Meanwhile, attempts by JoyNews to speak to officials of the Ghana Highways Authority in the Region have failed.