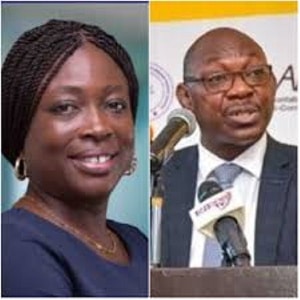 The trial of the former Chief Executive Officer of the Ghana Cocoa Board, Dr Stephen Opuni, and businessman and philanthropist, Mr Seidu Agongo, resumes on Monday, 3 October 2022, after a two-month legal break.

The extra period is pursuant to Article 145(4) of the 1992 Constitution, which grants superior court judges that concession to wind up active cases and hand them over before proceeding on retirement.

Prior to the legal break, Justice Honyenuga, who is also a chief in the Volta Region, had said that Chief Justice, Kwasi Anin-Yeboah, had given him some time to conclude the case.

The Supreme Court judge, who has been sitting on the case as an additional High Court judge, told the court on Thursday, 28 July 2022: “In pursuant to Article 112(2) of the Constitution, 1992, the Chief Justice has granted me a limited time to conclude this case”.

“In the circumstances, this court shall, in addition, sit on Tuesdays at 11 am for early disposal of this four-year-old case”, he added, before adjourning the matter to Monday, 3 October 2022 “, at 10 am for continuation”.

As the case returns next month, it enters critical mode and raises public interest in how things will pan out, especially as Justice Honyenuga was once prohibited from the case by the Supreme Court, which declared him incapable of being impartial on the matter after the defence team had accused him of bias.

The 3-2 decision was, however, subsequently overturned by the same Supreme Court after the state filed for a review, thus, restoring Justice Honyenuga on the case.

That case was heard by Justices Jones Dotse, A.M Dordzie, Amadu Tanko, Lovelace Johnson and Gabriel Pwamang after the lawyers of Dr Opuni had complained of Justice Honyenuga’s likelihood of bias against their client after the judge had rejected some documents submitted as evidence that inured to the advantage of the accused persons.

“A reasonably well-informed observer, taking account of the exclusion of the exhibits that appear to favour the accused person and the pronouncements made by the judge which connote that the 2nd and 3rd accused persons have defrauded Cocobod and it would not have happened but for the applicant [Dr Opuni] herein deliberately and knowingly facilitating it and that by that he has caused financial loss to the state, would come to the conclusion that the judge would not be impartial in the consideration of any defence the accused person has to put forward,” the majority decision read.

The majority noted: “The test is an objective one based on the principle that not only must justice be done, but it must be seen to be done. As the authorities say, bias is so insidious that the judge himself may not even be aware that he has a bias in the matter under consideration”.

“It is for the reasons explained above that I hereby grant the prayer for prohibition in order that justice will be seen to be done in this case. Therefore, in conclusion, the application succeeds on both counts and is accordingly granted as prayed.”

The review application was heard by an enhanced panel with Justices Gertrude Torkonoo and Prof Ashie Kotey as additional Justices to the original panel.

Mr Dame had argued: “The decision of the ordinary bench contained fundamental and grave errors”, which, in his view, “manifestly resulted in a substantial miscarriage of justice”.

In the AG’s view, “The decision to prohibit the trial judge must be on the basis of only compelling circumstances which shows indisputable bias on the part of the judge, and not on account of matters complained by the respondent [Dr. Opuni]”.

While arguing against the Attorney General’s review application against the Supreme Court Justice’s removal, Dr Opuni’s counsel, Mr Sam Cudjoe, told the apex court: “He [Justice Honyenuga] had made his mind and was going through the rituals while waiting to pronounce sentence”.

Dr Opuni alleged that his right to be heard fairly had been breached by the judge, aside from a demonstration of bias.

The allegations flowed from Justice Honyenuga’s ruling on a submission of no case application.

Dr Opuni’s lawyers contended that the judge committed an error of law when he rejected some documents submitted as evidence.

Since March 2018, Dr Opuni and Mr Agongo, as well as Agricult Ghana Limited, an agrochemical company owned by the latter, have been facing 27 charges, including defrauding by false pretences, willfully causing financial loss to the state, corruption by public officers and contravention of the Public Procurement Act, in the purchase of Lithovit liquid fertiliser between 2014 and 2016.

They have pleaded not guilty to the charges and are on a GH¢300,000.00 self-recognisance bail each.