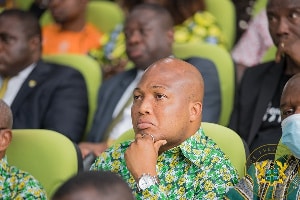 Member of Parliament for North Tongu, Samuel Okudzeto Ablakwa, has reacted to calls for a deferment and an audit of the National Cathedral of Ghana project.

The call was made by Archbishop Nicholas Duncan-Williams and Rev. Eastwood Anaba, with a core reason for their call being the many controversies that have dogged the project in recent times.

Ablakwa described the call by the duo, who are members of the Board of Trustees of the National Cathedral, as a sign of “exemplary Christ-like leadership, wisdom & integrity worthy of high praise.”

Accra-based Joy FM published a memo dated January 23, sent to the Board of Trustees, calling essentially for a halt and an independent audit of the project’s expenditures.

“That in the spirit and cause of transparency and accountability to the Ghanaian people, the current Board of Trustees of the National Cathedral shall appoint an independent, nationally recognised accounting firm to audit all public funds contributed to and spent by the National Cathedral.

“Auditors will also audit the overall cost of the project. This appointment of an auditor shall take place before the deferment of activities of the Board of Trustees,” excerpts of the memo said.

The National Cathedral project has been in the news recently for not too good reasons, as a result of a myriad of allegations levelled by Member of Parliament for North Tongu, Samuel Okudzeto Ablakwa, against the Board and its secretary, Rev. Kusi Boateng.

Ablakwa has exposed instances of public funds being put into the project, which government confirms is to the tune of GHC339 million cedis. He has recently questioned some payments made by the cathedral, but the secretariat insists all transactions were above board.