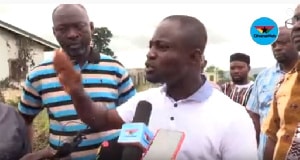 Residents of Juaboso in the Western North region are gradually falling out of business as Chinese nationals have taken over their daily petty trading.

Speaking on Okay FM’s ‘Ade Akye Abia’ programme, the Member of Parliament(MP) for Juaboso constituency, Kwabena Mintah Akandoh lamented that Chinese nationals are not only engaging in galamsey but are also selling provisions and spare parts.

A trading activity that was hitherto reserved for the indigenous community members of Juaboso and its environs.

Hon. Mintah Akandoh who is very much worried about the unpalatable situation says the government’s fight against illegal mining popularly known as galamsey has become a mere rhetoric with the Chinese mining with impunity.

“The NPP government do not have the desire to fight or end the illegal mining because they are not committed to it. A number of NPP foot soldiers and even top hierarchy are heavily involved in the galamsey business. For instance, with what happened at Elubo, an NPP constituency Secretary was among those who were arrested for destroying a whole village in the name of Galamsey,” he said.

He further explained that though government claims to have invested heavily in the fight against illegal mining, it looks more attractive now than before because those who are caught destroying the water bodies and the forest reserves are left to go unpunished which will at least serve as a deterrent to others.

“How can we allow Chinese nationals with the aid of Ghanaians to destroy our water bodies and forest reserves and also take over businesses meant for Ghanaians,” he rhetorically asked.

Expressing his disgust for the rate at which illegal miners have taken over his constituency, he noted that government’s abysmal performance in the fight against galamsey clearly shows that they are losing it.

Tough days ahead but recovery on the horizon – Bawumia assures

Tough days ahead but recovery on the horizon - Bawumia assures