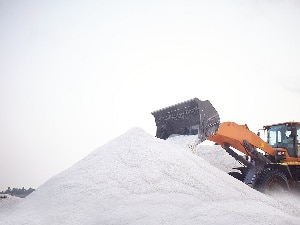 The operation of a Chinese cement manufacturing plant nearby, according to Mr. Daniel Boye, Operations Manager of local salt producer Panbros Salt Industries Limited, could contaminate its product.

Therefore, he demanded that the Empire Cement Company Ghana Company be shut down.

According to Mr. Boye, dust from the manufacture of cement could condense in salt ponds and taint the final product.

In reference to the location of the cement factory, he made this statement outside of a press conference organized by the McCarthy Hill Residents Association.

The Association expressed displeasure at the location of the cement factory in the residential area.

Mr Boye said the Panbros area was an environmentally protected Ramsar site and that the location of a cement factory in the area could harm the ecology of the sensitive area.

He said Panbros had engaged the cement manufacturing company on its location and possible pollution of the environmental and told the factory would be using a technology that would not release dust in to the atmosphere.

Nana Atta said they had been given the green light by regulatory authorities to produce cement at the location.

He added that the Company had put in place measures not to cause harm to residents.

“This is a multimillion dollar investment project that will provide jobs for the teeming youth and contribute to development in the community and the country as a whole,” the Co-Founder said.

200+ questions to ask your girlfriend that will help you bond

200+ questions to ask your girlfriend that will help you bond