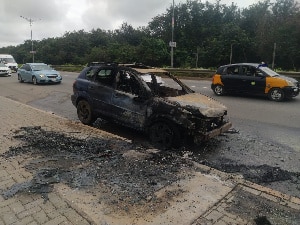 The car seen here was burnt to ashes

A car is caught up in flames near the Menzgold office in Dzorwulu.

The event which happened an hour ago has left drivers and passengers as there is severe traffic on the section of the N1 Highway going to the Accra Mall area.

Per reports, the burning car, Pontiac Vibe with the license plate NR 37 11 was being driven by a female.

The owner of the vehicle, according to sources she was on her way to East Legon, however, when she got to Dzorwulu she observed smoke rising from the bonnet of her car, as such she pulled over to investigate.

Shortly after this, the car caught fire and blew up in flames. She however managed to, with the help of some bystanders and a police officer who was around, to get her luggage out of the vehicle before the fire escalated.

Though details of what started the fire remain scanty, the owner of the vehicle is said to have narrowly escaped.

Meanwhile, some personnel of the Ghana National Fire Service who rushed to the scene have brought the situation under control.