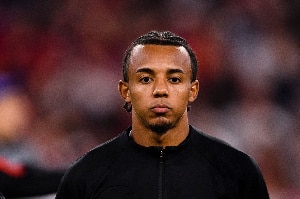 Barcelona defender, Jules Kounde is trending on Twitter after hitting back at Ghanaian influencer, Kaly Jay, who asked about the player’s salary.

Kounde initially posted sad emojis on his Twitter page. Kaly Jay quoted the tweet and savagely asked about the cause of the player’s post in a manner that triggered Kounde to reply.

“You haven’t received your salary yet?” Kaly Jay, who is a staunch Chelsea fan wrote in the quoted tweet.

The French international in reply wrote: “Salary has been paid in full, thanks for your concern my G.”

Kounde’s reply has gone viral and has triggered several reactions from Barcelona fans who have lauded the player for his reply.

Jules Kounde who was a prime target for Chelsea, snubbed the London side to sign for Barcelona, at the time the Spanish Club were in financial difficulties.

Below are some reactions

Jules Kounde has mudded Kalyjay, another win for Barcelona against Chelsea.😭😭😭

Kounde puts some random dude in his place. 🔥🔥 https://t.co/USv9HMQ70g

Kounde puts some random dude in his place. 🔥🔥 https://t.co/USv9HMQ70g