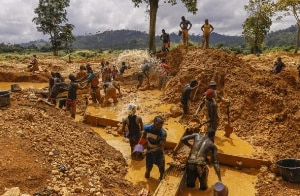 President of the Concerned Small Scale Miners Association in Ghana, Michael Kwadwo Peprah, has shared little belief in the recent measures instituted by the Ministry of Lands and Natural Resources to aid the fight against illegal mining.

According to him, the decision which includes ‘Operation Halt II’ is unlikely to produce any profitable outcome.

In his view, digging out and having a comprehensive understanding of the root problems of ‘galamsey mining is the way forward rather than brute force.

“The decision from the ministry I would say it would not yield any results not withstanding everything said. We have said that using the military approach will not solve this problem.

“The government thinks it’s always best to use brute force because they think people involved in small scale mining are recalcitrant. Until we understand the root problem of galamsey, we can never solve this,” he told Don Kwabena Prah.

He further alleged that Chinese nationals have flooded the various sites with heavy machinery engaging in illegal mining. Therefore, dragging them out of hidden tunnels and prosecuting them would be the right step in the fight against galamsey.

“In 2012, Former President Atta-Mills together with John Mahama took a decision against mining. The current government need to finger out what happened both the positives and negatives. At that time the Galamsey threats reduced totally. That was the time the Chinese were being deported.

“All these things that have led to us and Ghanaians talking about this is because everywhere our waters have been destroyed because of mining there are Chinese working. Ghanaians are fearful in nature and even as a result have redrawn their equipments because of the Minister’s statements.

“The problem is with the Chinese and it’s almost as if our politicians are afraid if them when we mention their names,” he added.

Mr. Peprah’s comments come after the Minister for Lands and Natural Resources, Samuel Abu Jinapor together with stakeholders reviewed some steps and strategies that have been implemented so far in the fight against the menace in a meeting on Friday.

The aftermath of the meeting outlined new measures including, red zoning river bodies and forest reserves, ‘Operation Halt II’ to ramp up support for the various measures being implemented to clamp down on illegal mining among several others.