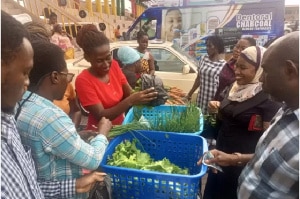 Some Kumasi residents who went to Kumasi Jubilee Park in hopes of finding inexpensive foods to buy have voiced disappointment, describing the pricing as being excessively high.

On Thursday, November 24, 2022, at Jubilee Park, the Ministry of Food and Agriculture brought its Planting for Food and Jobs trial market to Kumasi.

Along with the goods’ tardy arrival and the absence of various foods, including plantains and cassava, which the customers lamented, they also complained about the PFJ market’s excessively expensive costs.

Some of them who spoke to Class 91.3 FM’s Elisha Adarkwah said they would have been better off buying some of the foodstuffs in the open market instead of going to the Ministry’s much-touted affordable commodities market.

The Regional Director of Agriculture, Rev John Manu, however, said patrons were exaggerating about the prices.

He noted that patrons complained about the cost of local rice carefully packaged selling at GH¢70.