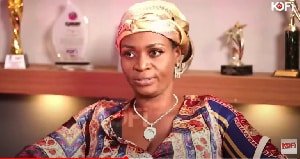 Social media loudmouth, Ayisha Modi, has come after Ghanaian female celebrities, accusing many of them of undergoing body surgery.

Modi went on a rant about body enhancement surgeries during a recent interview on Kofi TV with Kofi Adoma Nwawani.

According to her, people always talking about her for doing her body are simply jealous of her.

She also called them illiterates!

According to Modi, such people would have done worse than her if they had the resources she did.

Turning to the celebrity world, Modi minced no words as she alleged the majority of our favourite celebrities have also undergone enhancement surgery.

According to her, any female celebrity on television who has more than two kids but still maintains a banging body has had work done!

Recollet Ayisha underwent liposuction, tummy tuck and other procedures after gaining an unhealthy amount of weight.

Ghanaians have been shocked at her new body and continue talking about it but Modi could not care less about the whispers!