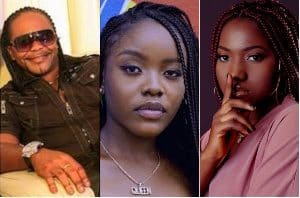 Ghanaian Afropop and Afrobeats singer, Sheila Music, who is the daughter of legendary Highlife singer, Nana Acheampong, has disclosed that almost all her siblings have been blessed with singing talent.

Two of Nana Acheampong’s daughters, Gyakie and Sheila, have ventured into active music by following the footsteps of their father, who is known as one of the country’s best songwriters.

“Music runs in our blood and family. Almost everybody can sing in my family, but with some, the grades are different. Some of us have more upper hand in bringing songs out, so yeah, it is in the blood and in the family. We were born to do music and that’s what we are doing,” Sheila disclosed.

Speaking in an exclusive interview with GhanaWeb’s Paula Amma Broni on Talkertainment, she shared her experience as the daughter of a music star.

She added that she has handled it normal although many see it as a big deal.

“Growing up wasn’t anything extra o. It was cool, he made sure we acted like normal children. To the world, it was a big surprise, but yeah, Nana Acheampong is my father. It was normal to me. He would sometimes come to pick us up from school and people would be surprised to see him. I will just tell him to buy ice cream for me. It was cool and amazing,” she said.

Also, Sheila added that growing up as a young girl, she was careful with the information she gave out to strangers, especially those who overstepped their boundaries.

“A lot of times, they did come to me. Some would want to overstep and know what’s really happening in the family. I mean be very private but we were coached against that stuff…if the person wants to go deep, I will be like, I beg, mind your own business (laughs).”

Sheila who is currently promoting her 2022 single ‘Like That’ which features rapper Strongman has announced that she is not going to be a nine-day wonder but instead bless music lovers with her tunes.