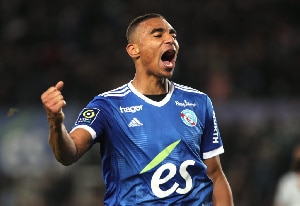 Leeds United of the English Premier League may sign Alexander Djiku, a Ghanaian international, according to Footballghana

The 28-year-old is presently playing for Strasbourg in the last season of his contract, and when it expires in the summer, he is anticipated to leave the team.

According to Guardian reporter Ed Aarons, Leeds United who have been poor defensively this season will be looking forward to signing the tough-tackling Ghana defender.

In an interview with GiveMeSport, Aarons said, “He’s been doing pretty well. He almost went to Hoffenheim in the summer, I think.

“There’s a problem that he might have with an injury, they’re just waiting to see what happened over the weekend, but he’s in the Ghana preliminary squad. Another really good player, a good solid defender who’s a good age as well at 28 now.

“I don’t think he’s ready for sort of the top-level in the Premier League yet, so somebody who is sort of down the lower end will probably be looking at him, maybe Leeds or somebody like that.”

Djiku has been named in the Black Stars provisional squad list for the 2022 World Cup to be staged in Qatar.