The nomination of the new Chief Executive for the Sekyere East District Kwame Adom-Appiah has been withdrawn.

A letter signed by a Deputy Minister for Local Government and Rural Development and sighted by Dailymailgh.com confirmed the withdrawal on Thursday, September 24, 2020.

No reasons were assigned for the decision.

This comes a day after the appointment of a former DCE for the area Mary Boatemaa was revoked by President Akufo-Addo.

No additional explanation was added to the revocation of her appointment but sources tell Dailymailgh.com that the development is in relation to an audio recording citing Madam Boatemaa of pitching electorates against sitting Effiduase/Asokore MP Dr Ayew Afriyie.

She is the second DCE to have been axed by President Akufo-Addo months after Amansie South DCE William Asante Bediako suffered similar circumstances.

She was also captured on the tape campaigning for an independent candidate which according to most party stalwarts could jeopardize the ruling partyâ€™s election fortunes in the constituency.

She is also said to have used unprintable words against the person of the Mponuahene of Asokore Traditional Area who doubles as the Chief of Okaikrom, Nana Akwantey Boffour.

Assembly members in the district were up in arms against Madam Mary Boatemaa Marfoâ€™s gross insubordination.

According the aggrieved assembly members, she has become a thorn in the flesh of residents of the district.

The assembly members in a statement accused the DCE of breaching procurement rules and awarded sham contracts to her cronies.

One of the assembly men, Atta Duruye Ernest in a live interview on Accra based NEAT FMâ€™s political show, â€˜The Torch Lightâ€™ called for immediate investigations into the DCEâ€™s questionable behavior.

On December 18, 2019, Accra based Peace Fm reported that the Effiduase-Asokore DCE assaulted the 78 year old Mponuahene of Asokore Traditional Council.

The angry Chief narrated that, Madam Mary Boatemaa Marfo pushed him after a heated argument on whether the Member of Parliament [MP] for the area, Dr. Nana Ayew Afriyie should be involved in inaugurating a health facility at OKaikrom, a suburb of the Asokore Township.

The Chief confirmed that the hardworking Legislator completed and furnished the magnificent health facility which was abandoned in 2007 as initiated by the late former MP, Mrs. Grace Coleman in 2007.

Madam Mary Boatemaa Marfo insisted that he, the MP, Dr. Nana Ayew Afriyie should not be invited to grace the inaugural ceremony.

â€œMy disagreement led to a near bout. The DCE pushed me and I nearly fell on the floor,â€ the Chief recounted. 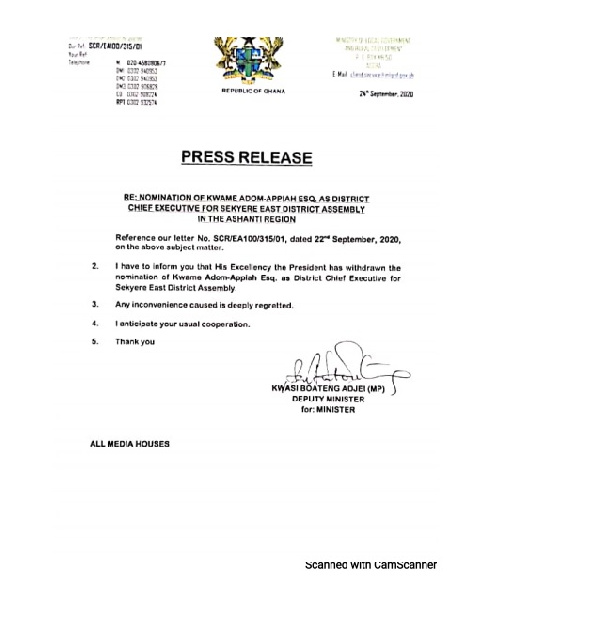 Vodafone staff will not be laid off – New management clarifies