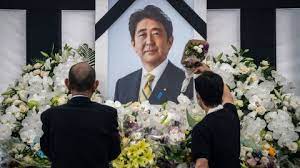 Japan bid farewell to former Prime Minister Shinzo Abe in an elaborate state funeral Tuesday, despite public opposition to the cost of the event as the
country grapples with their late leader’s legacy.

Abe, Japan’s longest-serving prime minister, was shot dead during a campaign speech in Nara in July, stunning a nation where gun violence is extremely rare.

Abe’s ashes were carried into the venue, where the government played a video tribute honoring his life and career. Prime Minister Fumio Kishida then delivered a memorial address, praising Abe’s “courage” and dedication.

Other government figures including former Prime Minister Yoshihide Suga – who was Abe’s right hand man for many years – also gave remarks, before attendees laid flower offerings and bowed in turn.

Other ceremonial rites on the program include an honor guard, gun salute, and musical performances, before a government reception for visiting foreign dignitaries.

Police ramped up security for the event, with public broadcaster NHK reporting that about 20,000 police officers were deployed to keep the peace. But altercations broke out anyway between police and demonstrators outside the funeral venue.

On Tuesday morning, crowds of people lined up outside designated memorial sites to leave flowers and pay their final respects to Abe, who dominated Japanese politics for a generation. But as they mourned, thousands of others took to the streets in anti-funeral protests across Tokyo, illustrating a deep public divide over the occasion, Japan’s first state funeral for a Japanese leader since 1967.

Some crowds chanted slogans as they marched near the funeral venue, waving banners that urged a stop to the proceedings. Protest leaders rallied the crowd through loudspeakers, and a van rolled past with music blasting from a boom box.

The protests grew tense at times, with several loud confrontations and scuffles between demonstrators and police. Abe’s death sent shock waves
through Japan and the international community, with thousands of mourners gathering in Tokyo in July as his private funeral took place.

But in the months since his assassination, the outpouring of grief has given way to a growing discontent. Abe’s state funeral comes as the country grapples with rising inflation and anger stemming from revelations that half of Japan’s ruling party members had ties with the controversial Unification Church, which has faced backlash over fundraising practises.

Some critics have also pointed to Abe’s more unpopular policies while in office as a reason for the shift in mood, and questioned why so much taxpayer money is going to the state funeral – which will cost some $12 million (1.66 billion yen) – at a time of acute economic strain.
“It was a tragedy that Abe was gunned down and lost his life, but we shouldn’t make him a hero out of this tragedy,” one protester, Shinsaku Nohira, told CNN at a recent anti-state funeral demonstration outside Japan’s parliament.

“At least half of Japan’s population is against this state funeral, so I don’t want the government’s messaging to get out there, I want people out there to know that there are citizens in Japan who are opposing this event.”

An opinion poll by NHK earlier in September showed that 57% of respondents opposed the state funeral, compared to 32% who
supported it – and the rest said they didn’t know, or declined to answer.

Prime Minister Fumio Kishida has tried to appease the public, saying a state funeral for Abe was “fitting” given his achievements as former
leader. The ceremony is not meant to “force people to mourn” or to become a “political issue,” he said in August. Abe’s tenure and assassination

Abe held office for two separate terms, during which he transformed Japan’s security posture, raising questions over the country’s status as a pacifist
nation, and passed a major security legislation in 2015 that expanded what Japan could do militarily to support the US.

He also was a prominent figure on the world stage, cultivating strong ties with Washington and seeking better relations with Beijing – while also trying to counter Chinese expansion in the region by uniting Pacific allies. One of his final successes in office was securing the 2020 Tokyo Olympics – though the Covid-19 pandemic forced the competition to be postponed to 2021.

After stepping down in 2020, citing health reasons, Abe remained active in politics, often campaigning for his party – which is what he was doing at the time of
his assassination.

NHK reported in July that thesuspected shooter, Tetsuya Yamagami, had targeted the former Prime Minister because he believed Abe’s grandfather –
another former Japanese leader– had helped the expansion of a religious group he held a grudge against.

CNN has not been able to independently confirm what group Yamagami was referring to, or links between Abe and any group the suspect harbored
hatred towards.

Controversial church under the microscope after assassination

But the assassination saw a backlash against the Unification
Church, which said Yamagami’s mother had been a member who attended church events, though Yamagami himself was never a
member. It also said that the church had received a message of support from Abe at an event it organized,
but that the former prime minister was not a registered church member, nor did he sit on its advisory board.